Some of Us Are Home (And Some Are Not)

Preface: All photos in this blog as well as the creative inspiration behind this bittersweet tale belong to our pal Petey to whom we are deeply indebted.

Well, it's true, Petey and I have left our lady loves on the other side of the Big Pee. Eric took us to Heathrow on the Fourth and Petey and I scampered off to our AireRuby flight, tickets in mouth, and now we're back in our respective homes in the US of A. 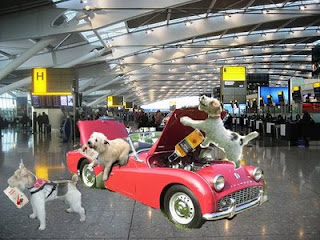 It was heartbreaking to leave my Gabbi, especially since Petey had found us such a sweet bungalow with bone shutters... 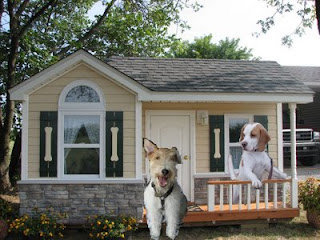 When I got home though, Mom was ecstatic to see me. But after a few minutes of excited tail wagging (me, not her) and scritches (her, not me), she looked around inquisitively and asked a very pointed question: "Jake, where's Just Harry?"

"Gee, Mom," I answered slowly. "Isn't he here already? He left our little group headed for Heathrow in Eric's zoomer and muttered something about making his own arrangements...."

And then, not sure whether I should spill the beans, I kind of added, "He did seem to be getting along really well with one of the Basset Sisters, Martha, and he said he was 'Just' going to hang around in Scotland with her for a bit. 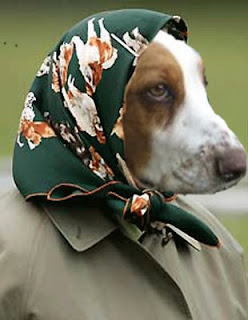 Apparently her sister, Bailey, had recently decided she had royal lineage and wanted Martha to be her handmaiden. But Martha, deciding that she preferred to be 'Just Martha,' asked our Harry what it was like to be 'Just Harry'. And while they were talking, they discovered they had a lot in common --- and well, that's all I know."

Except, I did get a glimpse of JH decked out in Scottish attire." 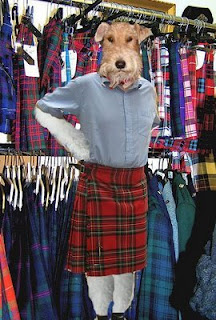 "Where they are now is anybody's guess. But HRH Bailey is getting impatient to find her alleged handmaiden. And now you're upset too."

Oh dog oh dog oh dog -- does anyone out there know anything more before we're all really in big trouble??????

Goodness gracious, we cant have this story getting out!!!
Whatever is to be done! Martha was happy running and fetching for me - she was born to it!!!!
We will have to alert my nephew Petey - he is sure to sort things out!!!
HRH Auntie Bailey xxxx
ps Goodness that picture of martha in the headscarf does nothing for her - you should have gone for the glamour shot over at Suzuki's blog!!!Although personally I thought she looked a bit tarty.....

So, let me get this straight. I get to go to NY, but I have to take the mom with me, but you guys get to go all over the globe? this just doesn't seem fair. But at least I didn't have to wear clothes.

We think JH looks great in his kilt! My sissie E.Rabbit has a real weakness with kilts, so if JH brings his home, I might need to borrow it to get me some brownie points.

I've got my BIG Sibe smile on after reading this one!

Oh-oh! I am going to check Martha and Bailey's blog to see if they know something!
Kisses and hugs
Lorenza

I'm not quite sure what to say. Martha had been my role model. Is this what I am to expect? Oh my.

(Just realized. I seriously doubt that I have any royal blood, so perhaps all is well for me. Not to worry.)

We are back! We have missed all our DWB friends.

Oh my...what's that Lacie bleating on about now? Panties under yer kiltie?? Umm....don't think so....and the Aunties would be devastated to find you shopping at VC when Martha's Secret does a great knitted line in bloomers!

We hope JH and Martha are behaving......what about poor Essesx? Surely it's just platonic and they're simlpy enjoying the tourist experience?

And we thought taking a trip to the dog park was an adventure... You're a jet-setter!

Just Harry is clearly a man of taste. I mean, what dog could resist Martha in that headscarf? Delectable!
Cheers, H.

sheesh, Just Harry is living it up, SOMEWHERE!? I sure hope he isn't in too much trouble!!