I’ve thought a lot about this since our Jakey left for the Bridge last Wednesday.  Ever since I told my closest friends how sick he was, and then, when the end had come, shared the sad news on his blog and on facebook, and with the fox terrier groups I belong to, I have been graced with such an outpouring of love and caring thoughts that my heart is so full there is almost no room for the tears. Almost.
And then it hit me, without Jake … and yes without his brother Just Harry… I would never ever have met all these kind, inspiring people and shared so many funny, sad, heart-breaking, exhilarating, life-changing moments with them and their dogs. My life would be so much poorer.
How did it happen? First there was the wire fox terrier group.  Nigel, Boozle, Linus, Gimlet Rose, Chad, Charlie D., Libby Longtail, Alle and Jack – these were among Jake’s first friends who opened the door to this amazing world of dogs who talk and express themselves and have serious opinions! Then some of Jake’s more adventurous wirey pals, tired of just tearing toys apart and chasing balls, said, try blogging, you’ll like it.
That led to the discovery of Dogs with Blogs, which, when the Barkalot Boyz joined in 2007, had several hundred doggers; but soon grew to more than a thousand. One of Jake’s first pals was Gussie (and Teka) whom Jake zeroed in on because Gussie was wearing a St. Louis Cardinals bandana. Our team!
Then he got to know so many others: Wires like Asta, Butchy and Snickers, Lenny, and Jackson; the Airedale contingent like Oscar, Maggie, Sunshade and Jaffa, Bogart, and Gooberstan; others like the Key West Collies, Joey, Wally, Ruby Bleu, Sophie Labrador, the Whippets, Lorenza;  and later Scruffy and Baby Stan and Lacie, Eric Square Dog, Petey, Martha and Bailey, Bertie, Mango and Dexter, Molly and Taffy and Monte and Winnie, Gabbi and her siblings, Khyra, Crikit and Sparky and Ginger, Max, Dewey Dewster and Asta Marie, Wilf and Digby, and  all the others, some still here, some with Jake on the Bridge, looking down and caring for us from on high.
In the beginning, it was all about dogs talking to dogs. Their humans all wore dog masks as far as I was concerned, and that’s how it was supposed to be.  But then Oscar, an Airedale pup we had just gotten to know, died suddenly.  And immediately those dog masks came off as hundreds of real people wrote on his blog to express how devastated they were at his passing.
Years have gone by since that moment. The dogs still talk to each other in their zany ways. But now their humans are dear, dear people whom I have come to love as close friends, family even. And that is Jake’s gift to me and to my husband Jack, his dad.
But one more thing. I couldn’t end this without adding Bogie T. Sherman and Ozzie Madison Shpigel to this caring universe that is Jake’s gift to us. They were there to welcome him when he landed at the Bridge. And they have helped and continue to help so many dog families adjust to the reality of their loss, somehow made less of a loss because of Bogie’s and Ozzie’s loving embrace.  Ah, if only the world at large were like our dog world, how much sweeter this earthly journey would be.

For Jake with Love Forever 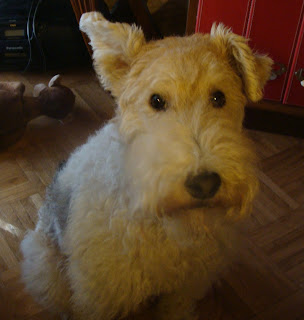 This is beyond sad and I don't think I can see to write much, but I know Jakey would want his friends to know where to find him.

After a too rapid decline from a diagnosis of pancreatic cancer just last week, we helped him cross the Bridge at noon today.

My heart, you were loved. 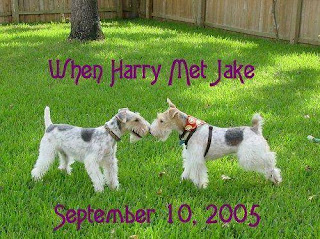 Well, I guess I do count for something. Mom who says she is too busy and too short on ideas other than for her seaport projects decided she could not let September 10 go by without remembering my Gotcha! Day. Once upon a time, as I tell everyone every year on this day, she and dad drove to Orlando with Jake to see if  the young wirey lad Lyn Townsend had rescued after Katrina struck Florida would like them... and if they would like me. But how could they not?

So the deal was struck and here we are, eight years later.

We all think I'm 9, as I looked to be about a year old when they rescued me. That qualifies me as a senior dog, I am told. But anyone who knows me knows that Just Harry is Just a Puppy!!!!! (See me with my niece, Ms. Olivia, who is 16 months old, sharing her toys when she came to visit in July.) 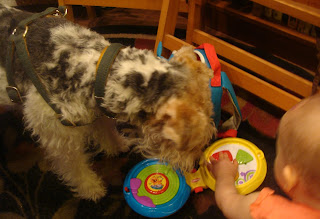 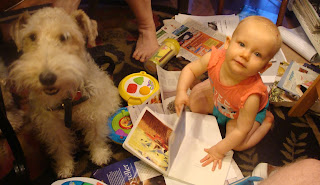 Wirey love and kisses to all who read this!!!!