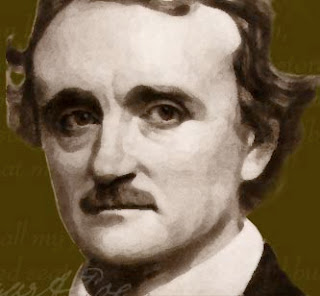 Since our recent recklessness with Edgar Allan Paw's famous pawm, we thought it appropriate to report that yesterday would have been his 199th birthday and note the way it has been celebrated in Baltimore since 1949, the 100th anniversary of his death.

Mystery Man's Annual Visit to Poe Grave
By BEN NUCKOLS – 1 day ago
BALTIMORE (AP) — Undeterred by controversy, a mysterious visitor paid his annual tribute at the grave of Edgar Allan Poe early Saturday, placing three red roses and a half-filled bottle of cognac before stealing away into the darkness.
Nearly 150 people had gathered outside the cemetery of Westminster Presbyterian Church, but the man known as the "Poe toaster" was, as usual, able to avoid being spotted by the crowd, said Jeff Jerome, curator of the Poe House and Museum.
The tribute takes place every Jan. 19 — the anniversary of Poe's birth.
The visitor did not leave a note, Jerome said, electing not to respond to questions raised in the past year about the history and authenticity of the tribute.
Sam Porpora, a former church historian who led the fight to preserve the cemetery, claimed last summer that he cooked up the idea of the Poe toaster in the 1970s as a publicity stunt.
"We did it, myself and my tour guides," Porpora, a former advertising executive, said in August. "It was a promotional idea."
Porpora said someone else has since "become" the Poe toaster.
Jerome disputes Porpora's claims and says the tribute began in 1949 at the latest, pointing to a 1950 article in The (Baltimore) Evening Sun that mentions "an anonymous citizen who creeps in annually to place an empty bottle (of excellent label)" against the gravestone.
Jerome invites a handful of Poe enthusiasts to join him inside the church every year but withholds details of the tribute in an effort to help the toaster maintain his anonymity. He said the visitor no longer wears the wide-brimmed hat and scarf he donned in the past.
In 1993, the visitor left a note reading, "The torch will be passed." A later note said the man, who apparently died in 1998, had handed the tradition on to his two sons.
This year's visitor was the same man who has come to the grave site many times in the past, Jerome said.
"We recognize him from his build, the way he walks," he said. "It would be very easy for us, visually, to see if this were a different person."
Poe, who wrote poems and horror stories including "The Raven" and "The Telltale Heart," died Oct. 7, 1849, in Baltimore at the age of 40 after collapsing in a tavern. Next year will be the 200th anniversary of his birth.
Posted by Jake of Florida at 10:59 AM

That was interesting and something we didn't know

I love Edgar Allan Poe! That was a great post! J x

Cool post guys - my human likes Poe, although her favorite is Dickens because they were born on the same day!

We had heard all about this from PL1(well he is an English Prof!!!) Love A+A

Kind of cool, maybe next year we can camp out and see if we could find out who is the mystery man!

I bet it was cold enough to make the cognac freeze this year!

well, romantic that she is, muzzer prefers to think that the cognac never freezes. But then, she still believes Emily Dickinson loved the judge.

That was very intriging!
I like Edgar Allan Poe .
Next year will be a special affair, I think you should host a pawty so we can all come & be part of a bit of history!

Mistress said "The turn of the screw" and then realised she had got the wrong author. Silly mistress.

Now she is off to work out what Poe (if any) she has read.

A plea. Please do not distract her. I have enough problems controlling her as it is.

A Poe toaster is very interesting, and so fitting for such a writer. Thanks for sharing this tidbit!

Great post boyz. Admittedly we don't know very much about Edgar Allan Poe.
How about that Poe Toaster...how intrigueing.

What a nice tribute to pay to him every year. His story is so sad.

Thanks for sharing that with us.

Jake and Just Harry
That was pawsome ..what a gweat stowy .

I loved what you did with his waven poem..we should send Joe in his detective coat next yeaw to find out who the toastew is(on second thought Joe wouldn't be caught dead in a cold cemetawy in Jaooawy..oh well )
smoochie kisses
Asta

Happy Birthday to him.

It's great to learn new things :) Thanks for the great post!

Very interesting! Did you know EAP's birthday was coming up when you wrote your poem?

Great post, guys! We should get a group of terriers together, next year to scare the wits out of the Poe toaster. Wahahahaha!

and the Canine Kids said,
Our Mom loves Edgar Allen Poe. She really enjoyed reading your post. Thanks for sharing.

Very cool story. I think I'd like to try to discover who the anonymous toaster was!