As some of you may already know, I, Jake, am the spokesdog for our family. I am the one who comes to ask Mom for breakfast in the morning (or Dad on some occasions). Just Harry just hangs around until he sees Mom get up in response to my request. Then he runs to his own food bowl as I go to mine. He also depends on me to use my wiles to trick Mom into giving us seconds. (Still working on thirds...) 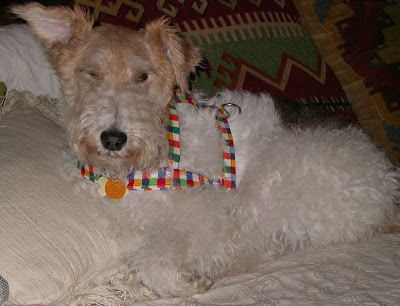 Ditto for dinner. Unless I ask, it doesn't happen.

Well, this evening, it was almost five and Mom was working at her computer. I wasn't really hungry, so I was just looking out the window and pondering the results of the New Hampshire election last night. (Mom and Dogdad stayed up until the very end and were pretty happy at the results!)

All of a sudden, Just Harry decided to take matters into his own paws. He ran over to Mom and when she asked him if he was hungry, he turned and ran to his bowl. (Talk about dogs learning from each other, as the whippets were discussing yesterday!) 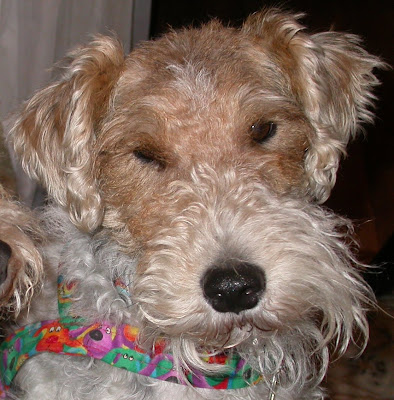 Mom got up and gave me my portion; but being sleep-deprived and distracted, she actually forgot about Just Harry, whose bowl is around the corner in his crate, and went back to her computer. So after a minute or two, Just Harry came to see what was wrong. Mom got up again, saw me standing by my bowl, my food untouched, and discovered JH with an empty bowl

Mom realizing what she had done, quickly gave JH his food. And then she also realized that the reason I hadn't touched my food was because I didn't want to start until JH was fed too.

Jake
Posted by Jake of Florida at 4:58 PM

Oh man jake you are a good dog. I would have eaten all my food and said who cares if Flash gets any. :)

Oh that is just the coolerest of stories!!! We are smiling all over from reading it, thanks, Jake!
(We love your name, Jake, because it's an awesome name and it's our very tall human brudder's name and we think he is coolest beans.)

all over wags from the whippets

We have stopped by before but this is the first time I've been able to get my typist to leave a comment. We both adore your harnesses - they are very pretty, err I mean handsome! Anyhow my human and I reall think they are super - we also agree with a post further down - AA Milne rocks - we like his poem about geraniums red and delphinums blue - it reminds us of Gramma's garden.

We have added you to our reading list and will check back soon!

awwwwwwww, you're so polite, Jake! What a good boy you are!

Crikey Jake, you actually wait for JH to have his food before eating, you are so good...... my sissies would never wait for me to eat, they just gobble their food as quick as they can. You've got to be a fast eater in this household or you miss out!

Jake, you are the bestest brother any pup could ask for. JH is lucky to have you there to watch over him.

Wow, we are not that good around here. I always wait to eat until my mommie tells me, but Katie and Sam just snarf theirs down.

How considerate, Mom said that is very good etiquette, whatever that is!

So thoughtful to wait for your brother. If you'd eaten really quickly and then licked the bowl clean, she might have thought she'd forgotten to feed both of you. Then you would have got more food.

Aw Jake, what a sweet brother you are. I have to confess I would not wait for Cassidy!

You are the brother we all want to have !!!!! Kisses, Faya

Jakey you are such a great guy! We have differences of opinion over food almost every morning, and Teka wins. But we loved listening to your story when G-papaw read it aloud. We just dont understand what "lesson" he thought we should learn from it!

Sometimes we don't understand him.

That is just so sweet, you waited for your brother dude. You are the coosest and most kindest doggie ever!!!!!

oh jake...ur such a good brother..

for me, i wouldn't think about eating my food...

maybe i even eat up JH portion too...hehehe....evil me

Hey Jake how courteous yous are. I Crikit carry my bowl around and sometimes I have to slam it on the floor or bump it into my humons legs if they are ignoring me. Sparky jus goes to whatever bowl has food and that's usually Gingers cos she likes to eat in the wee hours of the morning thats why she still has her girlish figure and I don't... whatever

Jake, you are so nice. If I had a little brother, I would eat all of my dinner, and then try to eat his too.

I'm so sorry I missed your sixth birthday while I was at camp!!! I hope it was terrier-ific.

And happy new year to you and Just Harry!

Whoa...I can guarentee that would NEVER happen in our house!!! We would eat the others dinner!!!! You are a very good boy!!PL1+2 were very happy about NH too!!! Love A+A

uh-oh. We came here and checked, we really did. And we didn't see that you already had one, and we gave you another "you make my day" award. Sorry. but you do make our day and oh well, as Eeyore would say (the REAL Eeyore, not the Disney rip off) Oh, bother.

the whippets and their silly servant

Awww Jake that is so sweet of you to think of your brother like that. I wish I could say I'd do the same but I know I'd scoff mine down and then try and convince HM that she forget to feed me too!

You are such a good brother (and so handsome, too.) What a noble thing for you to do.

I hope that Just Harry appreciates you.

What exquisite manners you have waiting for your brother to be served his dinner before you would eat yours.

We are most impressed.

Wow, that is so thoughtful.

I don't know what I would have done.

Yeaaaa, Just Harry! Way to ask your mama for yourself!

And Jakey, you are such a well-mannered and considerate pupboy. Stella would NEVER wait for me to get mine if my girl had forgotten to feed me.