Two and a Half Days at Camp

We've been quiet on this blog because we've been barking our heads off at camp the past few days. Mom and Dogdad had to travel to Tampa for a seminar so they packed us off to our favorite boarding place. When they came to pick us up, we dilly-dallied about leaving and our friends there said we were probably the only dogs who weren't anxious to leave.

Mom replied that days at home were probably very boring, since she sat at her computer working most of the day. As we said once before, we'll never tell.
Everglades National Park Photo 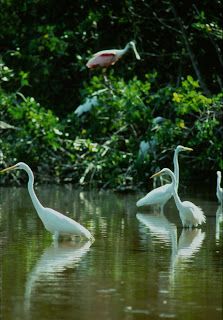 But what about E.C. Bird? Gussie asked last Sunday whether he could come to camp with us. We didn't think so, because of all the C-A-T-S -- and also the problem of fitting his enormous wing span into a confined space. He was not at all offended, though as he decided this would be a great time to spend a few days in the Everglades, catch up with some of his friends, and have better meals than the fish he can find in the golf course lakes.

To get to Tampa, Mom and Dogdad drive across Alligator Alley, which traverses the Everglades. E.C. Bird accompanied them until he found what he was looking for, and then said "See ya'!!" We assume he'll be back in time to take us to Azrizona for the Super Bowl -- but just in case we still have our reservations on Aire Ruby.

For those of you who may not know much about the Everglades, we've added a few facts about this awesome place.

Everglades National Park is the:
Largest continuous stand of sawgrass prairie in North America.
Predominant water recharge area for all of South Florida through the Biscayne aquifer.
A World Heritage Site, a Biosphere Reserve, a Wetland of International Significance
Home of fourteen endangered and nine threatened species.
Largest mangrove ecosystem in the western hemisphere.
Largest designated wilderness in the southeast.
Most significant breeding grounds for tropical wading birds in North America.
Only subtropical preserve on the North American continent.
Major "edge" area of the northern and southern limits for many species creating a unique mingling of diverse temperate and subtropical species.
Because of the way water flows through the Everglades, it is known as the river of grass, which is the title of an amazing book "Everglades: River of Grass" -- written by an equally amazing lady, Marjory Stoneman Douglas, who lived to be 108 and spent the better part of her life defending this unique resource.

"There are no other Everglades in the world," she wrote. "They are, they have always been, one of the unique regions of the earth; remote, never wholly known. Nothing anywhere else is like them..."

And we live just a few miles from this mysterious and truly pawsome place. It's not for dawgs, though, because of all the alligators and snakes...
Posted by Jake of Florida at 10:31 AM

Oh wow! What a fun place. Maybe the Egret could take Teka there for a while? I'm sure she could handle an alley Gator or two.

Had wondered where you were...
I've always thought the Everglades sounded fascinating but I don't like alligaters or snakes, they come next after mice & rats on mmy hate list! Think I'll stick around with you guys.

Mistress seems to think this is pawsomingly interesting.

She appears to be fascinated with the Everglades. I think she has read too many silly books.

Now, where are the cats in the Everglades? :)

Hehehehehe thanks for your comment on my blog. I am still laughing.

Naturally though, I don't rush anywhere. I am never in a rush to get off my sofa.

But thank you, I await more info about the catpanthers.

Do alligators ever take long walks and end up in your back yard, guys? We don't think we like alligators!

My girl has been to the Everglades and said it is stinkin' hot but bootiful. I think I'd love it, except fot the alligator danger and possible loss of limbs.

Hope camp was a BLAST!

Your parents had an exciting trip. I liked it in kennels too, Mummy was pleased and disappointed all at the same time. There's no pleasing some people.

It sounds like camp was lots of fun! We are glad everyone made it through alligator alley without meeting any residents! The Everglades have always sounded interesting but we think we enjoy them in pictures ... from afar!

We watch Crocodile Hunter sometimes, so no gators or snakes for us! The rest of the Everglades sounds like fun, though.

Glad you're all back home now.

Alligator Alley! That sounds cool! Can alligators be chased like squirrels? Would they mind be chewed on? We sure think the Everglades are fecund with possibilities for terriers! We wonder if Edgar's ghost ever got down there from Baltimore--he'd fit right in!

and the Canine Kids said,
We've never been to the Everglades but our Mom has and she has told us how beautiful it is. It must be wonderful to live so close to such a wonderful place.
Glad you enjoyed your time at camp!

Mom says that the Everglades post reminded her of a time her and dad were out fishing somewhere and they saw a 'gator. She can't remember where they were since mom never paid attention when dad drove her around in Florida. She used to love flying over the Everglades. She says seeing them from the plane was impressive. I guess it was one of those before us memories.
Thanks,
Ozzy

ur parent seems to have a great trips..

we love the photo from the national park...

glad u are finally back from the camp now..

Hi Boyz
I've missed you , but I know you always have a gweat time at bawkalotz camp..that pawk must be amazing, but i don't weally like allgilatows and snakes, but the biwds awe bootiful..I hope youw Egweat comes in time fow the pawty, if not we can all sit togethew on aiw Ruby
smoochie kisses
Asta

That place sounds scary! Mom just read an article about it in her Smithsonian magazine how the army broke it now they are trying to fix it!

Camp....what's camp? I think our mama shelters us too much!!

Fiona is doing okay. Mama thought she had found a home for her but now she's not too sure if it is the "right home." Mastiff rescue is trying to help out, so we hope she finds her furever home soon!

We've heard that if you zig-zag, an alligator can't catch you. We don't want to be the ones to test that theory!

Hey pals, glad you had a good time at camp. The Everglades look so beautiful. Shame about the alligators though. J x

Thank you for telling us all about the Everglades, it be interesting.

Hey Jake and JH,
The Everglades sounds wonderful apart from the gaters and other creepy things. You two best stay away from there though. Well I guess we have something in common cause we live in a world heritage site too.

Boys, you best stay away from those gators. They might chomp you down in one bite.

One of Mumsie's fav books is Skinny Dip by Carl Hiaasen...the unmitigated sarcasm is equal to hers...AND she learned tons about the Everglades from an author who truly seems to repect it for the special ecosystem it is...

Are ya ready to rumble???

SEE YA AT THE PAWTY!!