Earlier in the week, I, HC Bird, had escorted the visitors to one of Vancouver's historic places: Gastown. One of the oldest parts of the city, it has a special character that makes it very attractive to locals and tourists. 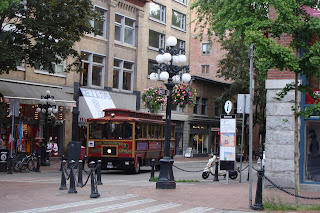 This what Gastown.org has to say about it:

"Established the same year that Canada became a nation, Gastown grew into Canada’s third largest city and one of its most cosmopolitan. But the Gastown district today retains its historic charm, independent spirit and distinctiveness. There’s no mistaking Gastown for any other area of Vancouver, or of Canada for that matter.

1867: The south shore of Burrard Inlet was a wilderness. Its only non-native settlement was a lumber mill where the owner didn’t allow alcohol on the premises. One September day, “Gassy Jack” Deighton arrived (he received his nickname because of his penchant for spinning tall tales and talking without end). He stepped ashore with a barrel of whiskey, telling the millworkers that if they’d build him a saloon, he’d serve them drinks. The saloon was up and running within a day…just across the property line of the mill. Gastown was born.

1870: On March 1st, in order to give it a more distinguished name, Gastown was officially proclaimed to be “Granville”, after the British colonial secretary. But everybody in the rough and tumble settlement continued to call it Gastown.

1886: Gastown was incorporated as the City of Vancouver, after British explorer, George Vancouver. That was April 6th. On June 13th, a brush-clearing fire got out of control and turned all but two of Vancouver’s 400 buildings to ashes.

Into the 1920s: Gastown grew and prospered, as did the rest of the City of Vancouver. But good times couldn’t last forever.

Depression Years: Gastown fell on hard times and deteriorated into a stereotypical skid road area until the 1960s.

1960s: With talk of demolishing the area becoming more widespread, a group of dedicated citizens took it upon themselves to save Gastown’s distinctive architecture and character. The city rallied around them. Gastown was not just saved, it was reborn.

Today: Gastown is a refreshing mix of old and new, downhome and upscale, a place for tourists, Vancouver residents and office workers alike. Various shops have the streets buzzing during the day. A host of restaurants and nightspots keeps the area humming into the wee hours. And, more and more, Gastown is becoming home to permanent residents…just like in the old days." 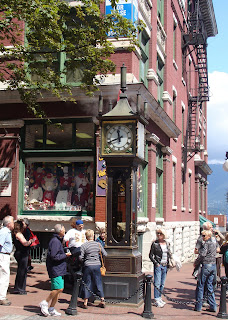 One of the most famous attractions in Gastown is known as the Steam Clock. Every fifteen minutes, steam comes out of the top of the clock; on the half hours, visitors are treated to a few seconds of music. (What you are treated to in the video clip below is a Dogdad Jack version!) 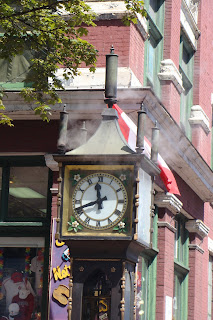 While walking around the city, I pointed out a shop that might be of interest to Martha and Bailey -- and perhaps to Bertie when he gets a bit bigger -- and maybe even to the expat Wilf. 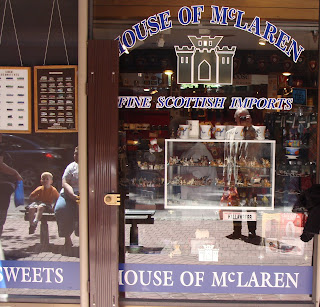 Earlier Flat Jake and Flat Just Harry provided a glimpse of another special place in Vancouver: Stanley Park. Here is the rest of their story.

Well, after meeting Christopher Robin, we walked to our destination, a horse-drawn carriage to take us through the Park. We met our escorts: Ace on the right and Clipper on the left. 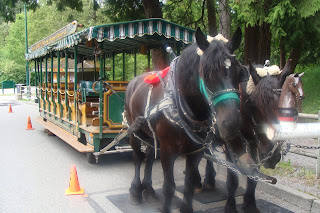 This is Ace. Apparently Ace and Clipper don't like each other very much and often try to bite each other if one gets in the other's way. (Mom suggested that this behavior was something we might know a bit about....) 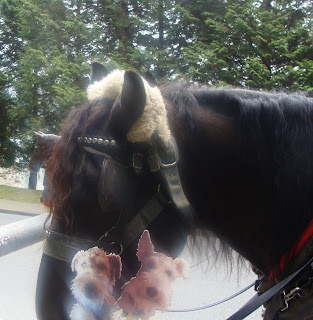 The ride was very interesting (once we turned around so we could see where we were going). 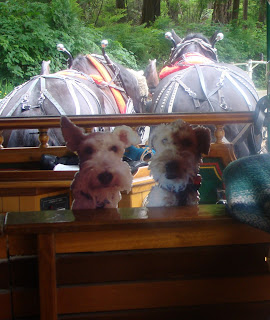 We stopped to look at some of the totem poles that have been erected as a tribute to the various First Peoples, many of whom once lived on what is now park lands. 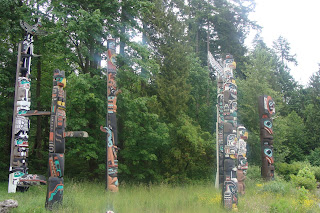 This one is a mortuary pole designed by Bill Reid. Mortuary poles were built with a box at the top to inter deceased tribal members. 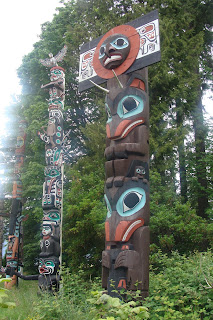 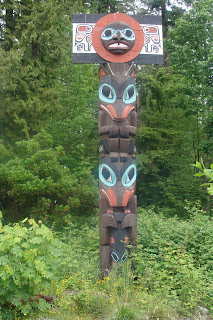 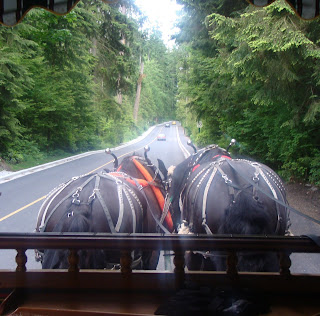 Along the way, we saw this somewhat bare lady who spends her life sitting on a rock. When the tide comes up, the water laps at her feet. Apparently, pranksters like to dress her in bizarre outfits to surprise visitors. 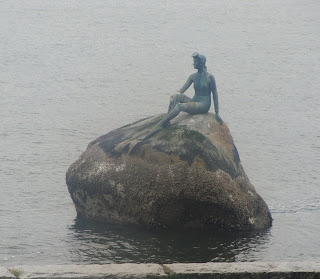 Although it's hard to see his face, we thought it important to include this statue of Robert Burns for our pals from Scotland. 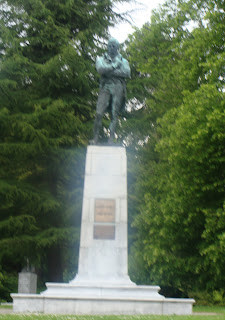 In addition to the beautiful forest lands in this 1,100-acre Park, a rose garden also caught our eye. 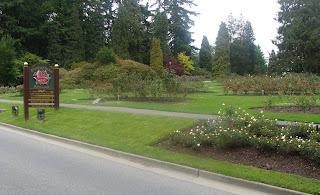 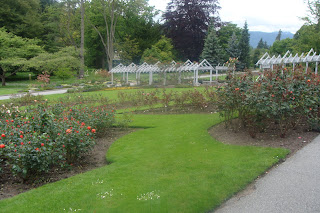 As quoted in Wikipedia, "On September 27, 1888 the park was officially opened, where it was named after Lord Stanley, Governor General of Canada at the time. The following year, Stanley became the first Governor General to visit British Columbia when he officially dedicated the park. An observer at the event wrote:
“Lord Stanley threw his arms to the heavens, as though embracing within them the whole of one thousand acres of primeval forest, and dedicated it 'to the use and enjoyment of peoples of all colours, creeds, and customs, for all time. I name thee, Stanley Park.'
Stanley Park has something for everyone. Bikers, walkers, lazy folks in horse-drawn carriages, sports fields, wedding pavilions -- and dog walking!!!
Speaking of which -- our last evening in Vancouver, our humans had dinner with Miss Sunshade and Jaffa's human and her beau -- and then they stopped over at their home to for a surprise good bye. Jaffa showed his prowess in catching tennis balls.
And Miss Sunshade the SUPERDALE wished them well on their aire voyage! (In the background at the end of the clip is none other than Jaffa having a drink.)
We're so happy we got to meet Sunshade and Jaffa and their mom. And now, apparently, we need to lay flat in a suitcase for our trip home because of all the "stuff" our folks have to carry. H.C. Bird is making his own arrangements.
Flat Jake and Flat Just Harry signing off!
Posted by Jake of Florida at 1:45 PM

Yeah well, flat in the suitcase may not be so bad, you guys can probably use the rest! I was worried about that picture with the horsies...looked like they might take a bite out of one of you guys.

This has been a wonderful trip.

flat jake and flat just harry,
you two dudes have had quite an exciting trip!! thanks for sharing every tidbit with us. my mama wants to go to vancouver really really badly now. :) have a safe trip home in the suitcase!
*woof*
the booker man

Thank you fow that wondewful twavelogue!!1
We enjoyed all the sight soo much..what a bootiful divewse city.
I hope you wemembewed to put holes all ovew the suitcase..safe twavels
smoochie kisses
ASTA

What a pawesome trip woo two TFT's have had!

Good thing you are already flat because I know how those humans can shop on vacation.

I am totally loving the steam clock.

Wilf would certainly be interested in the Scots imports shop - sausages, haggis, and shortbread all greatfully received.

Vancouver is just so awesome! We loved the steam clock! And the best part of the whole trip, in our opinion, was meeting Sunshade and Jaffa! Have a safe flight home, flat Jake and JH!

What a great trip you all had! Flat in a suitcase sounds like a great way to travel!...except that you can't see much!

You chaps certainly had a great adventure in Vancouver. Hope the journey home was a smoothe one.

Sheesh who would have thought we could learn so much from our Dog pals, thanks for all the cool pics and videos.

Now we feel as if we've traveled not just from CO to FL, but from the Pacific Northwest here. What an amazing trip! We're glad you travellogged it and we're glad Moma started here to catch up!

Now ... we're off to another blog. It may be a while before we're back, 'cause we're determined to catch up!

Welcome home to all of your selves,
Jake and Fergs xxoo

Dear Flat Jake and Flat Just Harry,
Can you believe it, we didn't even know you guys were off on a trip. mummy has been so neglecting her secretarial duties.
anyways, we are trying to catch up on evrything.
Loved that steam clock and the totempole.
Mummy so loves reading about different countries and the intersting things about various places. thanks for all the updates.

Wow! Beautiful! I would really like to visit there one day!

Wow! Beautiful! I would really like to visit there one day!

OHHHHHH Pl 1and 2 love love love Vancouver.. and love love love Bill Reid and now want to go back RIGHT NOW( we have not been there in case any one is askings..) Love A+A

We wonder if totum poles were the precursers to fire hydrants for dogs.