H.C. Bird and the Flat Boyz have the day off. This is their mom telling anyone who enjoys this unusual art about one of the highlights of the trip!
The Museum of Anthropology at the University of British Columbia has an amazing collection of works by the various First Peoples who have inhabited Northwest Canada for 10,000 years or more. In addition, the Museum has collected aboriginal artifacts from all over the world. It has a digitized system whereby you click on a screen, then on a map, to tell it which country you want to visit -- and the screen displays many of the items in the collection from that area. It is an astonishing contrast: new technology and old, old pieces, including masks, totems, statues, blankets, jewelry, paddles, weapons.
This gentleman below is from the tribe that inhabits the land on which the museum is built and he graciously welcomes you to his home. He's holding a fish and the tree branch is providing some modesty. 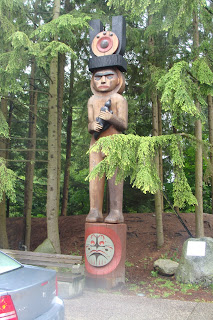 The salmon is one of the creatures that unites all the tribes --so it feels right that this piece of art also greets Museum visitors. 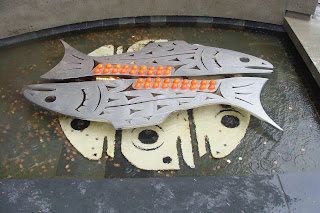 Yep, it was raining. 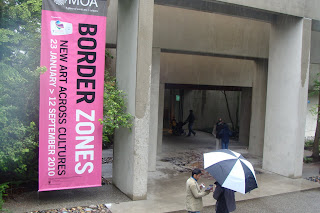 Many of what we think of as totem poles are actually door posts to the various tribesmen's homes. Most are very very old, and have lost some of the bright paint that once adorned them. Another example of new technology and old pieces: infrared photography has allowed anthropologists to see inside the wood and discover the original paint colors. 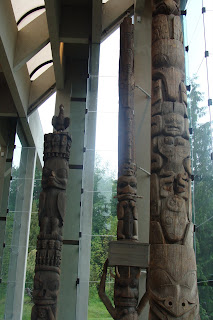 The door posts are carved with the personal crests, some human faces, and other elements that may be important to the inhabitants. It takes someone really into the art to decipher all of it -- but even without knowing exactly what you are looking at, it is very moving. The Museum has a Great Hall with huge old pieces and it's quite awesome.

This bear is very special. He was carved by Bill Reid, whom I mentioned in an earlier post, as an example of art from the Haida tribes, which he did a lot to revive in the 80s and 90s. Several years ago, before a seaport convention here in Vancouver, I won a plush version of this bear. He looks a bit less fierce as a stuffie, sitting on the bed in our guestroom. 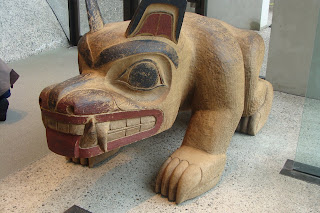 Bill Reid also did something extraordinary: in the 90s before his death, he helped carve a canoe similar to those that once plied these waters and had Haida descendants and others paddle it some 650 miles from Vancouver to the Queen Charlottle Islands, the home of the Haida nation (Haida Gwaii). When he died, his ashes were taken back to Haida Gwaii by canoe for burial. 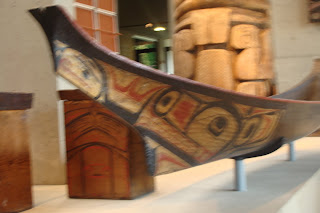 Below is one of Reid's most famous carvings. It builds on a legend that the Raven, one of the two tribal clans (Eagle is the other), while walking on a beach, spotted a clamshell with people in it and coaxed them out -- one version of the creation story. 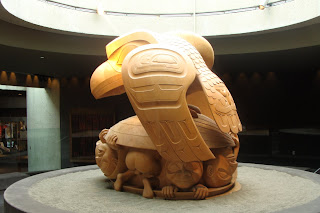 These are feast bowls, for when tribal families get together. 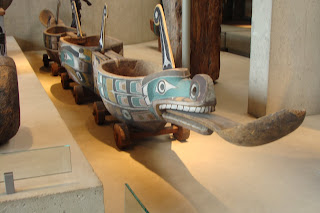 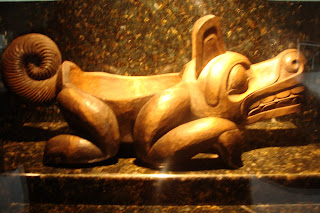 And below are examples of the stylized forms and colors used to depict various animals: bears, birds, fish. 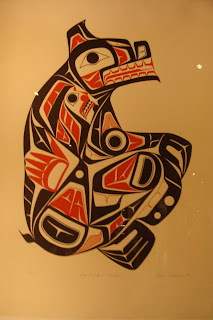 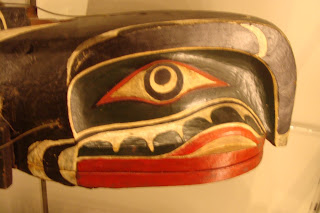 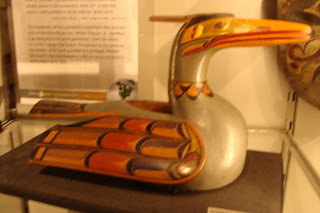 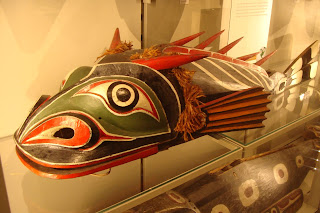 There's more, so much more. This is just a taste of one of the things that makes Vancouver so special.
Joan
Posted by Jake of Florida at 5:59 PM

Wow...we are glad that tree didn't get trimmed before ya got there! We love the shapes of this type of art...but sometimes I, gussie, find it a bit scarey!

LOVED THIS POST! The art is amazing.... loved the bear and the feast bowls. so much history to absorb, continue to soak it all in xoxoxo

Hey that bear that you have in the stuffie form is quite hot...did ya happen to get his number???

Those door posts/totem poles and other carvings are incredible...

We are loving your trip!!! Thanks so much for the amazing tour!!!

Auntie Joan
thank you fow taking us on this fantastic Awt toow..what bootiful wowk! Mommi told me they'we not scawy and I must leawn about awt, so i'm looking at them wif an unscawed eye. I think flat jake and just hawwy would have loved those too

Thanks sooooo much fur sharing these!

What a great exhibit of stuffs!

What a great post with so much neat information and beautiful artwork! What a fabulous city Vancouver is!

It is a wonderful place to visit. That artwork is out of this world.

Bootiful artwork!!! We're so happy your mom enjoyed it so much (and the 15 lbs...hehe). Mum went to big people obedience school there at UBC, and we go there for walkies all the time on campus. We don't usually walk that far to the Museum, but have been there before.

We hope you come back again, we miss you guys already....

wow, those pieces are quite intricate and lovely! my favorite was the raven and the clam shell full of people.

the booker man and asa's mama

Wow, those are so totally cool, I want one for my house! Oh, and sorry about the Cardinals...my Mom's Dbacks pulled off some miracles.

Now Moma's reminiscent about her trip to Alaska (and Vancouver.) Which got us to thinkin' ... wouldn't that be a fun DWB trip? A doggie cruise!

Dreamin on,
Jake and Fergi