Well, today started off as an easy day for this bird. As embarrassing as it is to report, the parents of my clients, Mr. Jake and Mr. Just Harry, spent the better part of the day hunched over their computers trying to finish a project proposal due on Friday.

But finally, once the job was done, the excitement began as they left the hotel to have dinner with friends and then go to the theater. On the way, they stopped at the Algonquin Hotel for a drink. 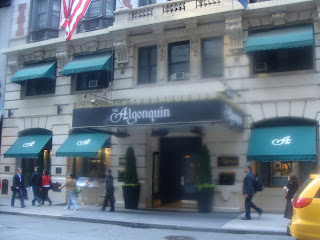 The hotel is famous for what is known as The Algonquin Round Table, where a group of young writers and critics, who favored the hotel as a daily meeting spot, set the standard for literary style and wit in the 1920s. 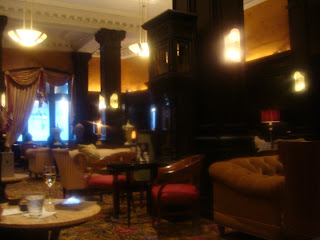 According to one author:
"After World War I, Vanity Fair writers and Algonquin regulars Dorothy Parker, Robert Benchley and Robert E. Sherwood began lunching at the Algonquin. In 1919 they gathered in the Rose Room with some literary friends to welcome back acerbic critic Alexander Woollcott from his service as a war correspondent. It proved so enjoyable that someone suggested it become a daily event. This led to a daily exchange of ideas, opinions and often-savage wit that has enriched the world's literary life. George S. Kaufman, Heywood Broun and Edna Ferber were also in this August assembly, which strongly influenced writers like F. Scott Fitzgerald and Ernest Hemingway. Perhaps their greatest contribution was the founding of The New Yorker Magazine, which today is free to guests of the hotel." 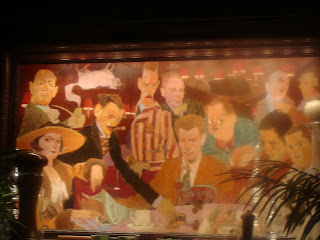 Dinner with the humans' friends was at a small popular bistro just next door -- and, I hate to complain, but She had lobster salad and didn't save me a bite.

After dinner, they walked (and I flew) over to the Palace Theater on Broadway to see the revival of West Side Story. While we were waiting for the doors of the theater to open, I shot a bit of local color to capture the excitement of Broadway!

And then the unique thrill of a Broadway show!! 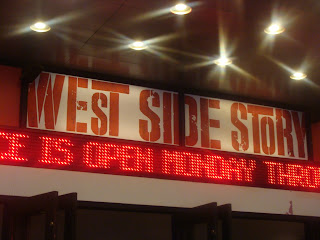 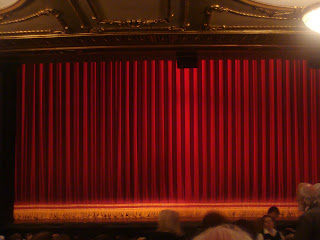 Lenny, if you are reading this, I have to report -- from my hidden perch on the rafters of the theater -- LEONARD BERNSTEIN MAY BE GONE, BUT HIS SCORE FOR THIS MUSICAL IS AS EXCITING AS EVER!!! The show, more than 50 years old now, was as energetic and vibrant as when it was first performed. The scenery was spare and mood-setting, the actors all young and true to their roles, the music soared, and the dancing was superb.

And to think I wasn't so sure about following my clients' humans to Manhattan!!

How come you are doing so well on New Yawk, and I got no input from Nawleans? Is it true that you sat on the riverbank and caught shrimp tossed by passing tourists? And how could you fly with all those necklaces you picked up on Bourbon St.?

Anyway, glad this is a better trip. Hope you remember to take lots of Asta pictures.

What a great report. We loved hearing about the daily meetings for exchange of ideas - all over a wee dram we have no doubt!
We loved the little glimpse of Broadway - our human brother's new wife was in New York last week as a birthday surprise and went to see West Side Story!
Cool for us to see and hear the buzz.
Keep that cam running Heron!
love
Martha & Bailey xx

And none fur woo?

As for WSS...how about a modern day The Khanines and The Khats?

My mom has an earworm NOW after seeing the lokhal kholour - something about Petula Khlark!

Oh Mr Heron....what a fabulous report, we really enjoyed reading it....and watching your video was like standing right there!
Tsk tsk, did you peck the female human for not giving you a bite of lobster for all your hard work? I don't know....some folk have no appreciation :o)
Now then, have any of your colleagues back in Florida done a fly-by of Jake & JH's camp? I would love to know how my little studmuffin is....
And we can't wait until tomorrow's report on the visit to Miss Asta's, how exciting!
I'm off to bed now to dream of my Jakey....*sigh*

I enjoyed the report!
I will be waiting for the next one!
Have fun
Kisses and hugs
Lorenza

The Jets, Sharks and a girl named Maria. Your parents must have loved it.

Essex must have had a good meal, she just let out a loud belch. Do WFTs belch? Cause Collies are pawsome at it.

Wow, they got to see West Side Story, Mom is so totally jealous. I am more jealous about getting to meet Asta, we can't wait to read all about it.

Wow, that is such a pawesome report! Thanks for sharing the photos with us! Manhattan looks great...wish I could go too!

Thanks for the great report, Mr. Heron! How cool to see West Side Story...and you're going to meet the lovely and charming Asta in pawson? How wonderful - we'll stay tuned.

See ya!
Joey and Zeke

What a great time you are having!

Have a great weekend.

MrHewon
I'm gettin concewned..I hope you didn't fall off the piew neaw my house, ow eat the wong kind of fishies.
Whewe awe you??????
We haven't heawd a peep out of you..awe the Boyz OK??
Tell them how much they awe oved by the two Js
smoochie kisses
ASTA

You are excelling yourself heroncam. I never knew they allowed birds into so many place.Looks like the leggeds are having a fabulous time, thas good.And I know day four will be wiry bliss!

Ahh the Algonquin..all of those writers are the PL's favorites...PL2 LOVES Dorothy Parker.We are glad they are having such fun even if they did leave their two little dogs at home and they have to hire a herocam to get a report on their parents who are having such a great time without them.......Love A+A ps the boys made us write that....

Mom loves the music from West Side Story! Lucky you to be perched right there watching the whole thing, HC-Bird!