Inquiring Terriers Want to Know: Squirrel Wars in the UK?

Yesterday, for the second time in a few months, we saw a segment on a Sunday morning show that amounted to an indictment of the invasive eastern grey squirrel for declining numbers of red squirrels in the UK.
When we looked up red squirrels on Wikipedia -- this is what we found: 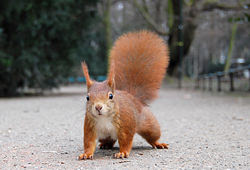 And further under grey squirrels: 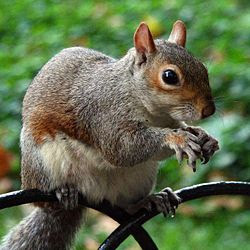 In the United Kingdom, the animal is known simply as the grey squirrel and it has few natural predators. This has aided their rapid population growth and has led to the species being classed as a pest. Measures are being devised to reduce their numbers, including one plan for famous television chefs to promote the idea of eating grey squirrels.[2] In areas where relict populations of red squirrels survive, such as the island of Anglesey, programmes seeking to eradicate grey squirrels are in progress in an effort to allow red squirrel populations to recover.[3]
Although complex and controversial, the main factor in the displacement of red squirrels by greys is thought to be the greys' greater fitness and, hence, a competitive advantage over red squirrels on all measures.[4] Grey squirrels tend to be larger and stronger than reds and have been shown to have a greater ability to store fat for winter. These factors are thought to result in grey squirrels competing effectively for a larger share of the available food, resulting in relatively lower survival and breeding rates among red squirrels.
Since many of our pals live in the UK, we started wondering if they had any special insights into the alleged Squirrel War. And of course, like good fox terriers -- or any terriers for that matter -- or any dawg for that matter -- we wondered if there was anything we could do about it.

We saw hunters shooting grey squirrels -- and we wondered if that was the best way to solve the problem, when there is an equal-opportunity army of dogs ready, eager, and able to chase those furry-tailed creatures.

Jackson, Eric, any other dog, what's up? Enlighten us, please. Do we need to book a trip across the pond?

Jake and Just Harry
Posted by Jake of Florida at 11:25 AM

Red Squirrels? Me Eric has never seen a red one.But then it would look grey to me anyway, tee, he,he!!! Let me ask Momi.

Eric's Momi here. No I've not seen a red squirrel for years. There are only a few reds in the Isle of White, parts of Scotland and Wales, but they say those will be gone in a few years. They are looking at ways to halt infiltration of greys by baiting food with birth control!!!! Apparently greys also carry a disease which only kills reds so cross infection will wipe the rest of the reds out. Some have asuggested culling ...I'm sure most terriers will be up to help with that?!

We saw a red squirrel the other day in the woods, but that's the first one J1's seen for ages. Red or grey, they're still like rats with tails and I'm happy to chase both. I think I've told you before that I caught a grey one once, but J1 made me let it go, the spoilsport! If you want to arrange a hit squad, count me in! J x

We have red squirrels in our yard! Sometimes they sneak into dad's workshop and they race around and climb the beams and drive us nuts! They are VERY fast !

red or grey doesn't matter all squirrels are evil. I got my box from you guys today. Thanks so much oh and for some reason your blog isn't updating on our bloglines. Weird.

Sqw-eeer-l. What the heck is that! Both of those pictures look like varmit! And I like to dig for varmit! Perhaps we should all go down to the UK and take care of all the Sqw-eeer-les. Heheheeh

J & JH, No natural predators? Bullocks! I will pred those squirrels and eat every one of them to bits. I'm also up for a UK vacation any time and why not during war season?

Greetings from www.wuffstuff.com, the social network for dog owners and dog lovers.

We're looking for members with quality dogs to add pix to our site.

Hope you could have a look at us.
Cheers
Steve
www.wuffstuff.com

Go for it guys, the greys are vermin with tails but leave the reds alone - pretty please!

Now, talking of tails, I invite you to dress for Royal Ascot - see my post...
Hey, Archie you can look sssooooooo handsome.
And Agatha,you can do head to head with Asta...

We saw a red squirrel in north England in April. There is a real problem at the moment in the area as the greys are spreading a disease to the reds as Eric says in his comment.
The wildlife people are doing lots to try and keep the dwindling numbers up and have put up loads of posters in towns and villages alerting the public to get in touch if they see a red squirrel with the disease.

Hey Boyz...we only have gray squirrels at our house...we're in South Carolina now at Hilton Head...we busted outta Camp Kennel to come down here and play with the gators....hmm...not very friendly dudes, are they....

There's tons of squirrels here...every tree has bout 10 of them!!

I left a comment here the other day and it's not showing! Boo! J x

We've never seen a red squirrel, though we have seen black squirrels.