We have a new relative! Her name is Marcy. She's part beagle and part hound. And look at that tail -- the envy of Jakey for sure.
Our Tampa brother and sister-in-law just adopted Marcy from the Tampa Bay Beagle Rescue Organization. She's about two and a half and will be sharing her new digs with two cats, Holly and Mistletoe -- featured in an earlier post. 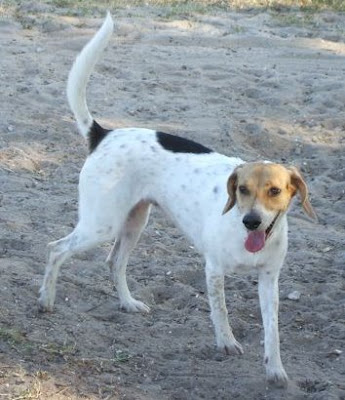 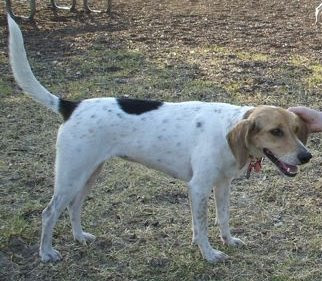 On another front, here's Gizmo, who's been living with our Orlando sister. She found Gizmo on the side of the road a while back and has been nursing her back to health. Since Gizmo still needs full-time attention, and our sister is working two jobs while getting her masters, Mom and Dogdad brought Gizmo to Hollywood on their return from Orlando last weekend to spend time with some nice friends who can do that. We can all go visit her whenever we want. 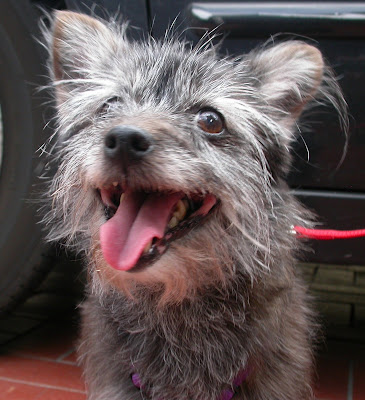 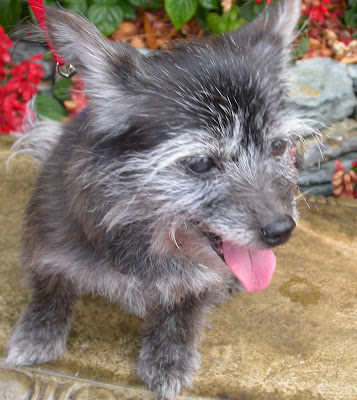 Mom held Gizmo on her lap the whole way back from Orlando -- and got very attached in those three hours. When we got home from camp, Gizmo was still here -- but she's a tiny, kind of fragile girl, so we didn't get to play with her.

OK, more later -- Dogdad is doing some planting outside and we have to go help!!!

She looks like a raccoon in a way or so mom says.

She is a real cutie. I understand why your mom got attached. I think there is a tiny terrier in there, trying to get out

Wow she really does look like the other Gizmo!! PL2 would have gotten very attached too!! Love A+A

I was thinking the same! She looks like Deetz's Gizmo!
Both are very cute!
Kisses and hugs
Lorenza

Fun to have new family!! go easy on the little Giz girl, boys!

wags from the whippets

Wow, your Gizmo is just as fragile and my brother...That is cool she was rescued....It is nice meeting you and hope to bark at each other soon
Deetz

Wow, your family is growing - what lovely cousins.
Gizmo does looks so dainty, like your Mom I did get attached to her too.

Big JUICY goober smooches to your sissy and your mama for helping Miss Gizmo out! Did she tell you all that was her name or did you just figure it out on your own?

She looks like a sweet girlie. I can see why your mama got so attached to her. I agree with Gussie. There's a little terrier in there trying to come out!

Thank doG for hoomans like your family, guys! You are some lucky pups!

Wow yer new relatives sure are interestin'.....never saw a tail that long on a beagle...my Mom could use some of it cause she has a schnauzer tail....do ya think they do tail transplants? Now Gizmo looks like she's part fox....I can see why the two of you had ta be kept away....she's really cute though.

Ooh, little Gizmo is so a cutie pie and just like Deetz's one!. Is she ok now?

and the Canine Kids said,
Marcy and Gizmo are adorable and we are so happy to hear they have found wonderful homes.

She looks like she might have borrowed a tail from some other doggie. Its somewhat plus sized.