There's a New Machine in Town!

Uh Oh!!! We thought Dogdad was out buying fence material. And he was; but when he came back from the Home Center after work earlier this week, he also had something in a very large box that was clearly not a fence. He brought it into the house and, as he unpacked it, we got nervouser and nervouser. It was definitely NOT a fence. It was a huge MONSTER. Dogdad put it all together slowly, piece by piece, as we circled carefully around. And when he was done, he clicked a button, and the MONSTER made a roaring sound. We've heard that sound before, and WE DO NOT LIKE IT!!!
So far, the MONSTER has stayed quietly in the hall, but this morning, in an attempt to show us that it was not a MONSTER, Mom moved it around a bit so we could see it better. Well, WE STILL DO NOT LIKE IT and the next time it makes that roaring sound, we will attack it before it attacks us. 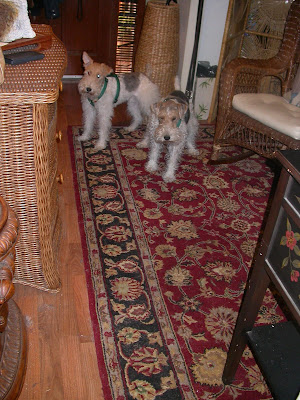 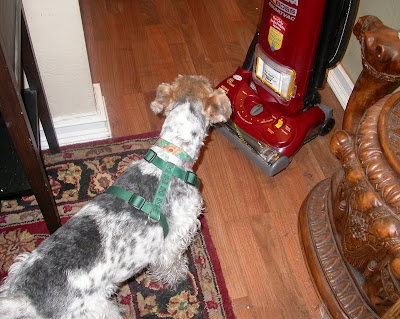 And imagine, in an attempt to fool us, the MONSTER is camouflaged in the same colors as the rug in our foyer. But we're no dummies. Camouflage or no, it's still a MONSTER!!! Mom, how could you??? 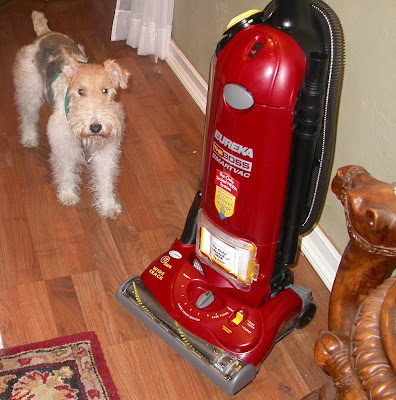 Jake and Just Harry
Posted by Jake of Florida at 10:06 AM

Our monster is blue and lives in our closet! We pups need to put our noggins together and decide how best to get rid of these monsters! We don't like ours either!

OMD...that is indeed a monster! That red color is twice as scary as our blue one. Does it have lights? Maybe it is a police car in disguise.

We hate ours...we have found that long strings from the tugs, hidden carefully, can sometimes disable it for as much as two days. But it always comes back.

If you find a permanent monster removal, please let us know

I have a monster just like yours living in my house too!!! I used to be scared of it, but my mom and dad helped me conquer my fear by letting me eat cheese on it. After that I figured that it wasn't really that scary so I don't mind when it rolls around the house and roars. Thanks for visiting my blog. It's great to meet other rescue dogs! I'll make sure to check your blog for past adventures.

Its one of those loud things that disturb my nap time, nasty.

Jake,
We share your dislike of the roaring monster....well...maybe I don't like it much but I just stay outta' it's way....now Toby, he just goes nuts and attacks it...bitin' at the bag and trying to rip it to shreds....now here's a dog that doesn't even smell peemail and vermin scent, I tell ya...what does he think it is... a mouse in disguise? There's no tellin' what goes thru some minds...or even if one is present...

Oh mom used our one of those today and said it had a smell like something was burning so ours might be ruined. woo hoo

We have a black monster in our house. We run to another room or escape outside if the door to the back is open.

To answer you question, we check out the following website when we travel http://www.petswelcome.com/

Recommend you call ahead to make sure they still accept pets. We don't know of anyone that came down with their dog. If you are coming to KW, e-bark us.

Sorry, but giggling here...
What a brave pair you are!!!
But, do hope the 'monster' doesn't gobble you up on it's next outing.

I've got a similar monster in my house, but fortunately it doesn't come out very often! Hehehe! J x

Crikey Jake and JH, that thing is huge. No wonder you're scared of it, we would be too. It must make a shocking noise.

We have a nasty monster like that too. Ours is blue but still evil.

Wow you two are some brave terrierists!!! When the servant brings out the monster here, which isn't all that often, to tell you the truth, we find something else to do far, far, away.

wags from the impressed whippets

WHat the heck do we ALL have a monster???Ours is white...so here is what you do....when it acts up grab it from the top and DO NOT LET GO.This makes it very difficult for your PL to push it and usually ends it them stopping..Love A+A

That monster looks WAY scary, it looks just like ours. tanner is always attacking it!

YIKES! You have a big monster in your house! We have a little round one (Roomba) that goes by itself - it always bumps my legs and then I bite it. I hate it.

Have you seen the pet food commercial with the Jack Russell RIDING on a monster?? He looks pretty crazy.