How I Got My Middle Name 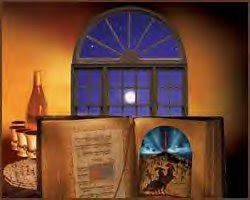 I was just reading my pal, Axel's latest blog. Part of it described the Jewish holiday, Passover, which starts tomorrow night. Reading about the eight-day holiday reminded me of what happened when my folks brought me home just a few days before Passover in 2002, and I thought I'd tell you all about it. (I've written about some of this before, so if it's old news -- please forgive me.)

It seems that I was an unplanned addition to the family. Mom and Dogdad had been at the hairdresser in a shoppng center in her old neighborhood. After she was groomed, they walked over to the nearby pet shop, just to look!! (I know, shame! shame! shame! but what if they hadn't?) There I was in the first pen, all of twelve weeks old. Cute? How not? They walked around looking at all the other sad, sleepy guys in their pens, and kept coming back to me. 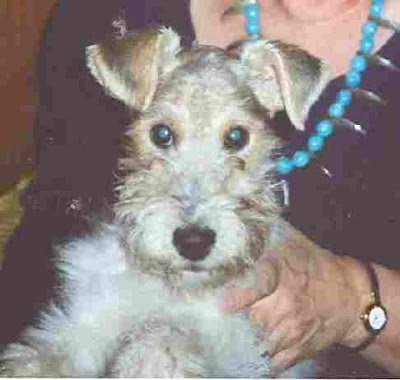 A name? What about a J to go with Jack and Joan? Mom pondered, and Dogdad pondered and when Mom finally said, "What about Jake?" Dogdad said, "That's what I was thinking." So Jake it was.

I got cleaned up, with a bow around my neck, and the Live Animal plastic crate in which I had come from a puppy mill in Joplin Missouri, and off we went to the PetSmart next door, to buy food and a few other necessities --- and home we went.

They forgot one thing, though. I wasn't potty trained!!! And Mom, bless her ignorant heart, didn't have a clue as to what to do. Little by little, though, she figured it out -- or rather, I should say, I figured it out. They put baby gates at both sides of the kitchen, and that was my paper-covered palace. Since Mom works from home, I got to go outside pretty frequently, and we managed.

But then, Mom had to shop for Passover food and left me alone for an hour or so. I don't know what got into me -- or what got out of me -- but when she came home, the kitchen was a mess -- and so was I. She screamed. I just put my little poopy paws on the baby gate and smiled. Her reaction? She called Dogdad at work, and asked him to come home right away. They needed their combined four paws to handle the situation. And that was what came to be known -- fondly in memory -- as Black Friday.

Once the kitchen and I were pristine again, Mom started cooking for the holiday. Her dad and brother and sister-in-law were coming for the Seder, and she had lots of special foods to make, including chicken soup with matzoh balls, brisket, "charoset' -- a combination of apples, nuts, cinammon, and wine, to make a paste that recalls the mortar used in building the pyramids -- boiled eggs, bitter herbs, and other items for the Seder plate to commemorate the Hebrews' flight from Egypt.

But then, what to do with me while the family had the Seder? Remember, this was before I had learned manners. It was Dogdad who decided the upstairs bathroom would be the answer. And up I went after greeting everybody. Well, I'm sure you all can anticipate what happened. First there was the non-stop barking that accompanied the meal -- but second, let's just say that when Dogdad went up to get me, he came back down pretty quickly and said to Mom, "You don't want to go up there. I'll take care of it."

And that was my first Passover.

But how did I get my middle name? Part of the Seder includes a special cup of wine for the Prophet Elijah, who, it is hoped, will come to spread peace throughout the world. And Mom and Dogdad, who love me lots and lots and think I brought them joy, decided that I was now an integral part of the holiday and deserved the middle name of Elijah.

So that's my Passover story!!

Hag sameach to all who celebrate!!

And just in case you're wondering: Things got a lot better very quickly, and now I and Just Harry get to sit at the table, or at least enjoy the food and songs with the family.

Jake Elijah
Posted by Jake of Florida at 9:13 AM

Weren't you so lucky to find your wonderful family!!! Oh but we ache for your poor mother and father in the puppy mill. We pray that by some miracle they've been rescued. Happy Passover wags from the whippets

What an awesome story, Jake! We're so glad that your mom and dad took a walk into that pet store and rescued you!
Happy Passover!

We had heard part of that story before, but not ALL of it. We are so glad that you joined your family, and that you and Jakey are now included in the celebration.

happy Passover to all
gussie

What a pawsome story! Happy Passover! We're very glad your people rescued you from the pet store!

you have been nominated for Photo of the Month over at the Bone Zone - head on over and cast your vote :-)

I liked that story. enjoy your passover.

Oh what a lovely story. We like the poop part the best.

etHag Sameach you guys!!!! Cool way to get a middle name and boy are we glad they stopped at that store!!!!!!! PL2 is going to cook tomorrow( a litle last moment but what the heck!!!) Hope you get lots of good stuff to eat and have a wonderfull Pasover!!! Love and kisses A+A +Pl2

Awww what a good story Jake. We haven't heard it before. We're so glad you were saved from the pet store.

What a great story, I love it.

Hi Jake and Just Harry
I came by to wish you a happy Passovew!!!
I'm so glad you have such a wondewfu family!!
smoochie kisses
Asta

I liked you story Jake, apart from the sad parts, about the puppy mill and you being in a pet shop. That's very shocking.

How glad am I that you were adopted by such pawsome pawrents or you might not have been my square dog pal!

What a lovely tale!

Happy Passover to you all.
So glad your now part of it.

What a great story!
I'm sure that after all the clean-up, your people are happy to have such funny stories to share with their friends. :)