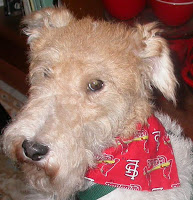 This blog will probably not be of interest to our friends in the UK, Singapore, Malaysia, and Australia -- but we have to write it because it's pretty much all we're talking about in our house. With about 25 games to go in this year's baseball season, our St. Louis Cardinals are making us craaaazy. Right now, they're just one game out of first place in their division, but they win several games and then they lose several -- and it's a seesaw with the other top teams, the Chicago Cubs and the Milwaukee Brewers. Out of the 25 remaining games, three are with Milwaukee and five are with the Cubs. So it's do or die time.
Dogdad (and Mom too) is driving us nuts. Even though they get up at 6 am so he can beat the traffic, he won't go to sleep until he gets the latest scores from the Cardinals games. And then over breakfast (at 6:30 am), it's 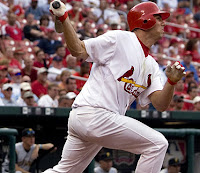 either Yay!!!, or [unprintable words]!!! Not a good environment for quiet, peaceful, loving dogs like we wire fox terriers (yeah, sure)!!
Rick Ankiel
Busch Stadium 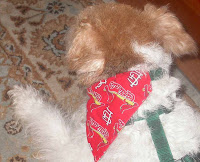 As we told Wally, who's a Cubs fan, Dogdad is chewing his own nails down to the quick and we're afraid he'll start on ours next. And we're wearing our Cardinals bandanas full time now. (And bowing our heads in
prayer.) 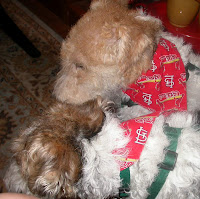 Anyone out there who wants to join in the barking for -- Gussie, we know you're there, and the Key West Collies -- or against, let's get those paws crossed and may the best team win. We should add that, while we're cheering for the Cardinals, we're weeping for our Florida Marlins, who have taken full possession of last place in their division and will probably stay there for the duration.

We understand EXACTLY how important a certain team is to their fans! My dad is a total nut case about the NYGiants! He won't miss a game for anyone or anything - even to the point of being rude, mom says!
Mom says she has no idea what kind of apples are on our tree! The tree was here when we moved to this house!

We haven't a clue!

Haven't taken my cardinals collar off since Butchy and Snickers gave it to me. Dad wears his Cardinals shirt to teach classes at the U, and he is going to the games tomorrow and Sunday.

Muzzer is in baseball widow mode for the remainder of the season. I just wish they could sneak me into the ball park so I could watch the game, instead of listening on the radio!

We hope your dogdad gets some sleep this weekend, but with the games all starting at 6:30 pm (9:30 your time) well, let's just say that he and E.Rabbit may be two of the tiredest persons on the East Coast!

Go Cards!
Up the Terriers!
Gussie

My Human likes the Cardinals. Me, I think that they'd win more games if they were named after a dog rather than a stupid bird!

Never knew you were such Cards fans!! My girl used to be back in the Lou Brock days, but she's really a die-hard Cubs fan since she was a wee thing.

Me, I don't get the game of baseball AT ALL. What's up with any game where you want to get rid of the ball as soon as you get it? No respect for the ball, I say. (I do appreciate the sunflower seeds and other treats associated with the sport, however).

I'm sure its all very exciting, if you understand any of it.lol

Go Red Birds, Go Indians. We are hoping both make it. Indians are ahead by five but have some tough games in front of them. Arooooo.

Ahh...we're Pittsburgh Pirate fans here and since it's been a decade and a half since we've had something to REALLY cheer about, we will switch our allegience to the Cards. Pawsitive vibes to your team as it gets to playoff season!!!!!
Hey batter, batter, batter!!!
Scruffy

We know what you are going through, and we are going through it too here with a different team. For over 40 years my family were Philadelphia Phillies fans! Need I say more? The very same Phillies with the 10,000 losses. It looks like they have a chance to win their division since the Mets are having trouble, but they won't. They have a chance at the wild card, but they won't win that either. As a friend of mine said a couple of years ago, "The Phillies will do what they always do".

For years, we had the Phiilies Triple A team only 22 miles from here. Last year they dumped us and are moving to Allentown. The New York Yankees then moved their Triple A team here and we are now Yankee fans. But we didn't just change that quickly. The Yankess have been our favorite American League team for 40 years, too. Now they are just our favorite team! It is easier rooting for the Yankees than the Phillies. At least they will probably win the wild card. Going from a team with over 10,000 losses to one with 26 World Series titles was not that difficult. The hardest part for me was getting used to all the blue, after years of red. The Phillies are still our NL team though. GO YANKEES!!

Well, Coming from a "wicked"(as we say here in Boston) sports town, we are fanatics!! And the Red Sox( and the Patriots) are our teams!!!! So... may the best team win!!!(and we can all have fun rooting!!) LoveA+A

This is a complete mystery to me, but I hope your team wins, if it will make you all happy! J x