So there we were, Mom, and Dad, and me, and him. We all had something to eat and drink and a few cuddles and then it was time for bed. Mom looked sheepishly in my direction when she picked Harry up to talk to him, and Dad immediately did the same thing with me. I think they were trying very hard to make me feel like things were normal.
But, "Where is this guy going to sleep?" I asked myself. "Not upstairs in my bed!!" When Mom set Harry's crate down in the living room, made him comfortable inside, left the radio on the way she did when I was a puppy, and gave me my usual peanut butter bedtime treat before we went upstairs, I kind of relaxed. Fortunately, Harry was too tired to fuss, and we all had a good night's sleep.
In the morning, I ran downstairs to see if he was still there. He was. Even worse, although our kind isn't supposed to do that, he had made kind of a mess in his crate. Mom wasn't mad -- she figured this was all new to him and he needed some time to figure things out. And it was Sunday so we had lots of time to hang out and teach Harry what was what.

After the first night, however, Harry decided he didn't want to sleep in the crate. He whined and barked, and Mom decided to take a chance and let him sleep upstairs with the rest of us. She got him his own bed, so I didn't have to share, and everything was OK -- except that in the morning he ran downstairs and peed on the couch. But after that, he settled down and learned the routine --for the most part.
When Harry quickly found my squeaky toys in the living room he started playing with one of

my favorites. But you know what? I took the mature approach and let him have it. And that's how it was for the next few days. I'd start to play with something and he'd find a way to steal it from me. But I just ignored him. Or we'd play tug-a-dog and I'd let him win .
Then we discovered the chase. First it started in the living room - round and round and round the coffee table -- me 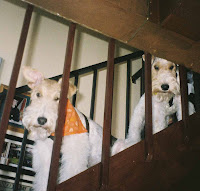 chasing Harry -- with an occasional humping when I caught him -- and him chasing me until we both stopped, sniffed, did the terrier shake shake shake and went off to get some water.
When we went up to bed, we discovered that we could add something new to the chase. I had forgotten that I could scoot under the folks' bed from one side to the other. But Harry figured it out. So when we got upstairs after our peanut butter kong (he soon learned that was one of the perks of living here), we'd start chasing each other until he'd "go to ground" under the bed, expecting me to follow him. It's not for nothing, though, that Dad calls me "smarter than the average dog." I soon realized that, instead of following Harry under the bed, I could run around to the other side and surprise him when he emerged. Mom and Dad thought that was pretty funny!
And that's how we spent our time until soon we had a new intruder. Her name was Hurricane Wilma and she deserves her own story, next time, in Part Three.

Labels: going to ground under the bed, Peanut butter, the chase

Hey y'all: Loved the most recent installment. You do know that this is how Charles Dickens got his fortune (and a bit of fame) right?

Chase is my favorite game. Me n Teka play it lots and lots! I am smarter than the average dog too, just like you Jake, and sometimes I just stay in one spot and wait for her to find me! Lazy? not Gussie!

Looking forward to the next installment. Is that Hurricane person (dog?) still living with you? Hope not. Do not think they are such nice friends

Hey pals, so you get peanut butter kongs too? They're my absolute favourite, especially if mixed with a swirl of cream cheese and then frozen.
JH was one lucky dog that you were so nice to him, Jake! I don't think I'd have been very pleased if another dog stole my toys. Looking forward to the next part! J x

Nice to mett you two, what a handsome pair you are! I'm lookng forward to getting to know you and hearing all about your adventures!

Hi Harry and Jake. We wuf your blog name! Glad you stopped by the DogsAyeView 10k. Dogmom said to email her if you need help figuring out the link thing and want to do it. (dogsayeview@aol.com).

You two were made for each other! It does sound like you're smarter than the average dog, Jake! Wish I could chase around and play tug-a-dog with you guys! What a blast that would be.

You're welcome in GooberStan anytime!