Frogs and Ducks and Lizards, Oh My 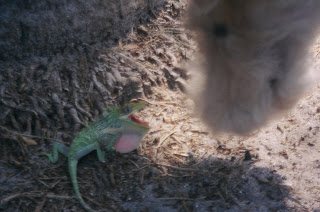 Last night my brother, Just Harry, went scampering after frogs, which made me think I should talk about some of the creatures that share our neighborhood -- besides the dozens of dogs and cats (they'll get their turn too).

After a scary drought and lots of wild fires, the rains came a week or so ago. And so did the frogs. Personally, they don't interest me. Even though they're tiny, in the dark you never know if they could be poisonous buffo toads. But young JH is nuts about them. He searches them out at the base of the trees in our neighborhood when Dad takes him out for his pre-bedtime romp. He doesn't hurt them; with his tail wagging merrily, he just likes to follow them as they hop away. He gets so excited that he often forgets the purpose of the trip, but that's another story!

Then we have Muscovy ducks. They are really cute when they're little -- but as they grow up they get bright red wattles on their faces and lots of people don't like them. Also, not everyone is as patient as they should be when the ducks cross the road in our development. The other day, Mom found a duck laying under a hedge, with another duck sitting next to it making very sad sounds. The duck had been run over by a car. But yesterday, we saw two cars stop and wait and wait and wait until a Momma duck and four young ones crossed the road. That made Mom and me feel a bit better.

Finally, we have lizards, lots and lots of lizards. They lay around in the sun and wait for some unsuspecting insect to cross their path. Then they snap. JH has learned the trick, and sometimes in the house, we'll hear a little clack, and see JH snapping at a speck of dust. Like I said, he's a pretty funny guy.
Posted by Jake of Florida at 10:41 AM

Wow, you've got lots of interesting creatures where you live. I chase spiders and flies (and cats, of course) but that's about it! J x

Hey guys!
I'm glad you finally got your pictures and such working and that you've finally joined the world of blogging! Mom had a moment when you mentioned the ducks. She remembers them fondly when her and dad were just dating and she'd fly down to visit him. She said to say thanks for the memories.
Wirey hugs,
Ozzy