Every Once in a While...

The phone rings. Or someone knocks at the door. Or when out together, a small creature attracts their attention. And Jake barks to Just Harry: "I've got it!" And Just Harry barks back, "You think so?" And two otherwise lovable, usually peaceful terriers turn into helions and attack each other.

Yesterday it was my cell phone ringing in the other room. As I rushed to get it, I must have triggered a frenzy and the next thing I knew Jake and JH were at each other in the hallway. Not a pretty sight. Not a pleasing sound. After what seemed like an eternity, with a splash of water to shock them into separating, JH gave Jakey a friendly nuzzle and they both took off to the stairs where they sat in all innocence on their respective steps.

Having learned from a few past skirmishes to check for blood, I first examined JH. He was fine.

Then it was Jakey's turn and I found a scraped bleeding patch just south of his right eye and another wound that didn't seem as though it had punctured the skin, but was alarming nevertheless. Cleansing and neosporin to prevent infection and a temporary bandaid. And of course the dogs were going about their business as though nothing happened while I was shaking in my boots, er, make that bare feet. So here you have it the morning after: 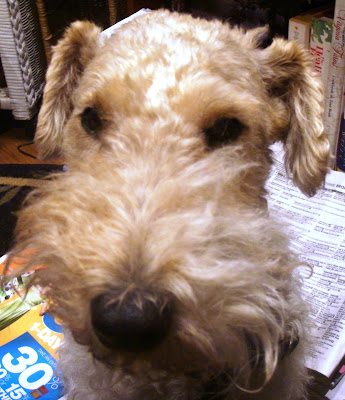 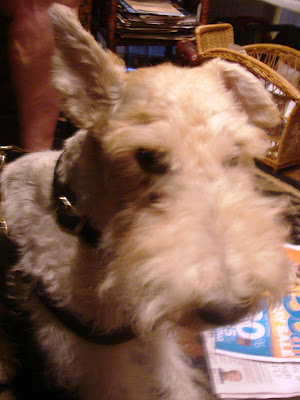 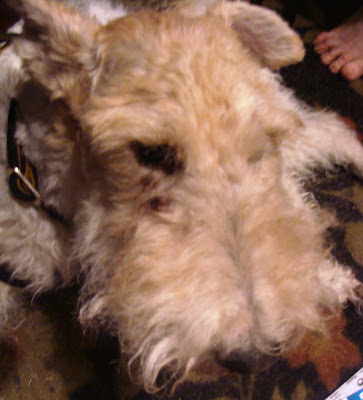 THE OH SO INNOCENTS 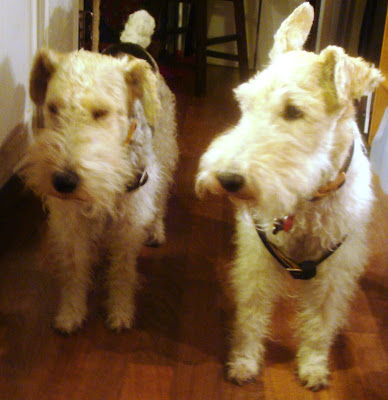 THE MOM (not shown)

I admit that I have several squirt bottles im strategic places to break up "spats" between our two
. Learned that lesson when Gus' eye got injuredc in a"spat" in Tennessee. Hope it heals fast and smooth. Recommend dollar stores for squirt bottles:)

There has been time or two when Mom had to drag the girls outside to the water hose to separate them - and then they still wanted to fight. Boys are a lot easier to separate - girls want to fight to the death!!

Bertie and his 'friend' Jake have been known to behave like this. Alarming, especially as Bertie is a fraction of the size of flat-coated retriever Jake. I have taken note of Gus's squirt bottle tip. Hope JH is fine and the wound heals well, with no infection.
Cheers, Gail.

We have Ginger at our house who is the Ninja Attack Queen (mostly she attacks Jeter). She would not dare bother with Halle! We went through a spell where Ginger would attack Jeter during a walk.

During one such attack (on an Easter Sunday no less) we were walking along a road and there were (fortunately) 2 men raking their front yards. One of them happens to be a police officer.

As we walked by, Ginger suddenly and ferociously attacked poor little Jeter. It was so violent and noisy that Halle got out of her harness, Toby just stood still and it took me and both of those men together to separate Ginger from Jeter! I told the police officer that Ginger would be good for apprehending criminals!

Ginger wore a muzzle during the walks for about a year after. Since then, no stealth attacks but I am always watchful.

Be good Jake and Just Harry!!

My Maggie and I used to love to race each other to the door to see who got there first but we never chomped down on each other. Go easy, guys - you're brothers!

Once in a very great while we have a skirmish here, but it is almost always over food. Once in a while a silly toy. But all is forgotten in no time. Just very scary and unnerving for the humans.

Gosh we have NO IDEA what you are talking about HAHAHAHAHAHAHAHAHAHA listen WHEN THE PHONE RINGS IT IS AM EMERGENCY DO YOU HEAR ME AN EMERGENCY... Why do you think PL1 and 2 have their phone down so low they miss half of their calls? Tell the boys we totally understnd even though the humans don't . ANd every once in awhile you just have to have a good fiht.. Right?(Pl2 is violently shaking her head but we are not sure why).... Love and kisses A+A

I tell ya guys....before me 'n Toby got our pertinent parts removed....we had some fights that woulda made yer ears curl in fright. Pap said we woulda killed each other if he hadn't been able ta get ua apart. I will attest ta the fact that Toby nearly lost his one ear becuz of me....actually it was becuz Pap picked 'em up and I was still holdin' on fer dear life. It has been awhile since we last fought.....guess those missin' parts were part of the problem....at least fer us....knock on wood....

I can only imagine your worry as this was going on. It sounds like the time that King Toffee attacked the newly arrived (Maxdog) puppy all those years ago. As they say, 'The Bark is worse than the bite.' In this case, the the growling was worse, it seems.
So glad that there wasn't too much damage done. Dogs will be dogs!
Sending lotsaluv to you,
MAXMOM IN SA

Am now catching up on your news and - oh gosh - I was getting scared just READING this post - I can't imagine what your human must have felt like, being there in person to watch!! :-( I guess 'spats' are just the way we doggies sort things out and "boys will be boys" - I'm glad there were no serious injuries - but do take pity on your poor human!! Maybe next time you can just *talk* it out? :-)

Hey Barkalot Boyz-nice to see ya! Yikes, my PU would be shaking, too - glad you're all right, though!

My blogroll mysteriously disappeared in its entirety a few months ago, and I've been slowly rebuilding it-putting your link back up now!

Hope everybody is OK. It is a really weird behavior, but I have seen it with my own dogs. They get excited by something and then go after each other. With mine, it tends to happen if I have to lock them in a room for a bit when there is something going on in the house.

Then, like your two, they are all friends immediately after. Go figure.

WE hope Jake's eye is all healed up now. How worrying.

When a phone rings in our house we stay where we are and, wait for it......

Yep we sing. If the phone rings more than 4 times we let loose and there is no chance of anybody having a conversation.

Perhaps you could try that J and J?