We Ain't No Turkeys, but We Wuz Plucked... 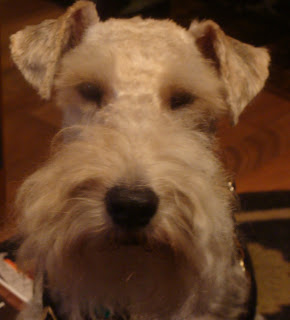 ... and clipped and scissored and -- all in the name of handsome. Sure, Mom says it's important that we wirey guys (and gals) take good care of our furs to avoid health problems -- and we do like to look sharp -- but it's not something we -- especially me -- enjoy. That I can tell you.
Remember all that stuff a few days ago about gratitude??? Sure. Am I supposed to be grateful for being forced to have my jacket stripped and then the rest of me subjected to the clippers? And my paws? DON'T TOUCH MY PAWS!!! I don't think so. Even if it's true that Dogdad is kind and gentle and only plucks the parts that don't hurt (too much), I do not like it. Not one bit.
Accordingly, I have a carefully developed avoidance strategy. Ask Mom. She'll tell you.
Usually we groom Jakey first. He doesn't seem to mind -- even though his fur is woolier and takes longer to do. He's a much more stoic dog, But when JH sees any of the "instruments of torture," i.e., comb, furminator, brush, clippers, scissors -- he disappears. So when Jack was ready for JH and we called him in a normal voice, no answer. I added a usually irresistible "treats for dogs" to the call. Still no answer.
So I began to search: Pillows under the chair by the window in the breakfast room? Bed next to the red chair in the corner of the living room? Comfy pad under the coffee table by the couch? Middle stair? Jakey's crate under the stairs (which Jake never uses and JH has adopted as his private retreat)? No sign of errant terrier.
But then, one more possibility: Next to Jakey's crate is a second crate in which JH eats his meals. In desperation, I looked in there and saw him huddled as far back in the corner of the crate, behind his food bowl, as he could get! Poor baby.
We didn't want to trick him, so Jack let out his traditional "Calling all dogs, Please report to the East Gate for your evening walk." That truly is irresistible. Off he went with Jake and JH and when they came back, the jig was up for one young WFT. Once the grooming has begun, though, he accepts it without much fuss-- except for the paws part. 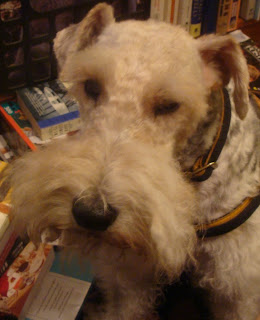 Well, I got through it -- and I have to admit, I don't miss all that curly stiff around my face and the long black fur down my back. Yesterday we had a photo shoot outside and as you can see, I have my polka dots back -- and my brother can see again. 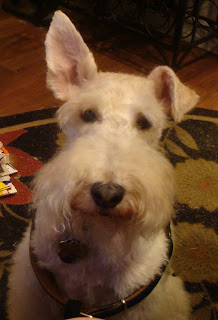 He consoled me for all my fears and told me to be on the look out for anything unusual in the neighborhood . 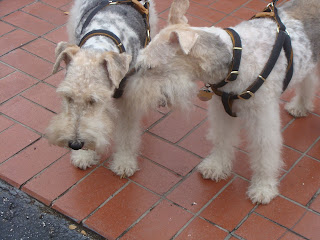 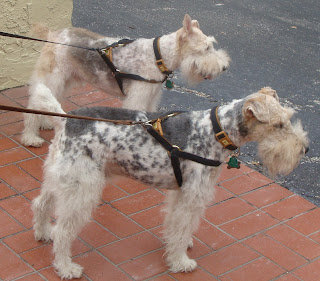 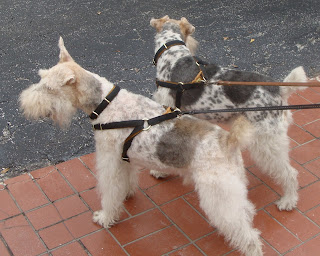 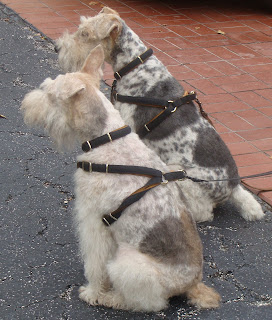 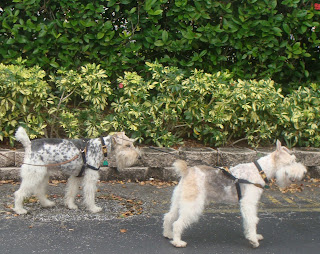 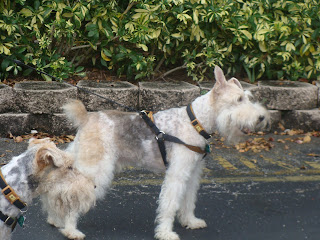 Not so bad, I guess.

After we satisfied the folks' thirst to record our striking looks, Jake let me sit on his bench for awhile to chill. 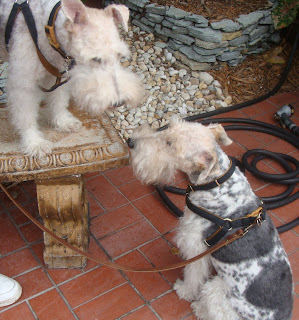 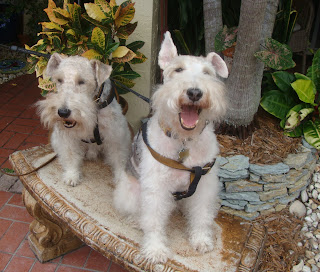 (It's truly Jake's Bench. Often when we come back from a walk, Jakey will jump on the bench to sit for awhile, catching the smells on the air and observing what's going on. JH never does that
Later, I settled down with my red rooster to ponder a new strategy. 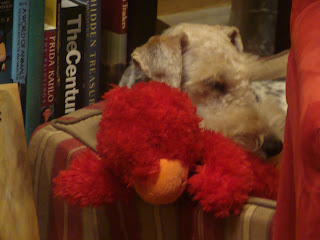 And since Jake was so cool with me, letting me share his bench and explaining how to deal with life's apparent inevitabilities, I let him settle with one of the other toys I choose to call my own. 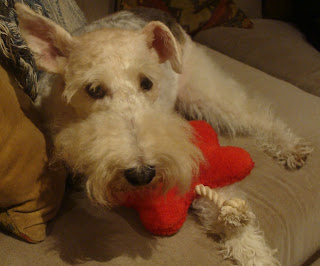 Not that I want him to get used to too much brotherly love or anything... but it is the start of the holiday season and all that!!
Just Harry
Posted by Jake of Florida at 2:53 PM

Oh my, what we go through to be beautiful, huh?

Oh JH, is this gonna happen before the trip to st. Loulis too? I just got bathed and brushed, and muzzer says I have another (one more) appointment before our trip. And all Teka has to do is get in the shower with Muzzer!

Life is not fair, but we are far handsomer than she is bootiful

You guys both look so handsome! It won't be long before the flashy beast will be taking your holiday pictures!

At least you got a walk out of it! And you both look so handsome!!!

*kissey face*
-Fiona and Abby the Hippobottomus (who is swooning at the photos!)

I must say you boys are looking quite dashing! This post allowed me to recall a sweet memory of my late apricot poodle, Porter, who also HATED to have his paws touched. He would show us his teeth (would never ever bite) whenever we would slowly reach for his paw. Actually it was quite entertaining. He left us in 2007 at almost age 17.... was the best dog ever and no dog can ever replace my sweet Porter.

We must admit that you do have to endure a lot for those cuts, but you really do look superbly handsome. And JH, we don't like anyone messing with our paws either.

Looking dapper...both of you:) I'd suggest that dogdad and mom get you a couple of ties and you'll begin to look like two bankers!

I am just wondering whether winters is really a good time to shear off that rich coat?

Nice clean cut...You guys have nice skin, love the spots :) We live in Fl too but we are keeping our coats, we even wear sweaters! It's a cold one here tonight, hope you guys have some T-shirts to put on.

Oh Boyz, please don't be giving Gail ideas. I mean, you do look really sharp and all that, but I think you might have added that some hairdos that are suitable for the milder Florida winters would not be right at all in Northern Scotland, where we current have about 6 inches of snow and a gale force Arctic wind.
I am so hoping that I can stay shaggy until next spring!
Toodle pip!
Bertie.

Crikey JH, we never realised you had those spots hehe. Very cute and we love your new wirey cuts. We've been clipped ourselves just in time for summer.

Two handsome WFT indeed. The fuss was worth the result and I love your polka dots. I'd like to ask your mom about your harnesses please. Do they help you from tugging and where did you get them? Thanks, you handsome boy, you. Ann, TBL

You are both very very handsome. Just think it will be a long time before the dreaded Furminator and scissors make an appearance again.

Just Harry and Jake!
You two look soooooo handsome!
Now we can see your polka dots!
I hope your weather is nice so you will not miss your four-coat!
Kisses and hugs
Lorenza

Oh Polka Dots...there is a new Kate Spade coat out for winter that must have stolen your fur design, cut the lining looks just like your back...not that Mumsie's buyin' it, but she loves looking at it!!

You poor poor boyz...all that spa work...and yes, I know all about the wire foxy distaste for paw work....Scruffy goes bananas....

And, yes, I agree with you that Mumsie had better be far more careful with the Lacie, I'm just sayin'....I know she felt horribly about it, but all the windows blew out...Scruffy said somethin' bout a gas leak, but he's just stoopid...

And that last pic of yours could be Scruffy....

We girls are all aflutter - you both look so very handsome -do you date or are you in committed relationships?

WEll WHERE DO YOU THINK HE LEARNED THAT CRATE THING?? Me of course.. I CAN NOT TOLERATE being groomed ESPECIALLY MY FEET where my brother being a tool for the man LOVES to have it done and just sits there and makes googly eyes.PAH ... Right now my BROTHER looks(so he thinks) FABULOUS all well coiffed.. AS for me?? Pl1+2 said I am not looking my finest..AND THAT IS HOW I LIKE IT>.. grrrrr Love Agatha and her "coiffed" goody two shoe brother

I don't get any of that sort of stuff, but I am still puzzling about this coat thing I have acquired.

So nice to get a new 'do just in time for the holidays. You both look very nice. :)

Dear Jake and JH,
Sorry we haven't been along as much as w would like to. But we do think of you and wait till we get to come and catch up with everything u have been up to.

Jake, we loved your thanksgiving post.
How apt and how beautifully said!

Though we do not celebrate thanksgiving, all our friends and their thoughts did make us stop that day and think of all that we are thankful for.
and Mummy says she totally understands what your mummy said. We are her antidote too. in fact we are her pre, pro and post treatment for evrything irritating and nasty that she faces everyday.

JH, we are sorry u had to undergo that grooming torture. But u do look very very handsome at the end of the day and of course the rubs and brushing sessions are really enjoyable, u have to agree on that one.

Just Hawwy,
I soooo undewstand youw pain..I feel vewy much the same as you do about this whole witooal. I don't mind the stwipping of my back but my face Fowgedaboutit! Oh well, aftew it's all ovew, i must admit we do look spiffy..i love how bof you and Jakey look , youw Polkadotses awe gowgeous and i love seeing jakey's eyes. I also love youw cuwwent seasonal bwuvvewlu love fest..i think its awfully nice to have someone to shawe youw twoubles and joys wif
smoochie kisses
ASTA
pee ess Mommi says she wishes youw hoomans could have been hewe to visit too