Once upon a week in Nova Scotia 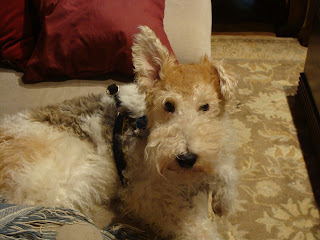 So, while we were in animal camp for a week (eating our daily dog's breakfasts and dinners), our humans were off to a delicious place called HALIFAX in NOVA SCOTIA where they dined on CAPE BRETON OYSTERS and DIGBY SCALLOPS and SMOKED SALMON and FISH AND CHIPS and CRAB CAKES -- and LOBSTER, lots of LOBSTER 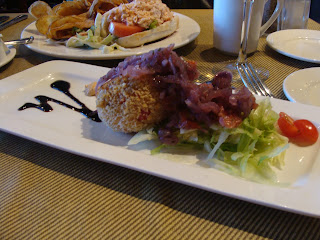 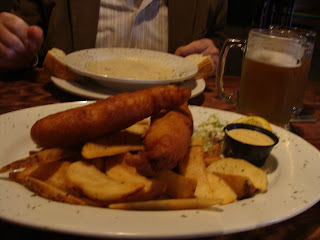 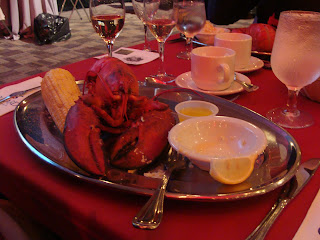 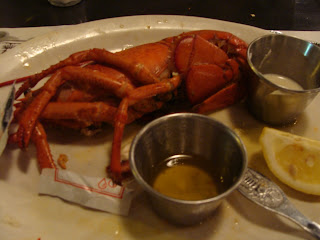 Some of our long-time pals will recall that every year around this time, Mom gets to go to a different port city in the US or Canada or occasionally the islands for an annual seaport convention. And Dogdad gets to go along as a SPOUSE. (While we get to go to animal camp.)

Last year, they were in Galveston, marveling how the city had recovered from Hurricane Ike, which had struck the island the year before. Previously, when the convention was scheduled in New Orleans, Hurricane Katrina had visited the year before as well. And now this is very weird -- it didn't happen the year before the convention -- it happened this year. First Hurricane Earl came to visit Halifax. And then Igor decided he wasn't going to miss this convention city either. Both storms bypassed the East Coast of the US (including South Florida for which Mom was extremely grateful, as she thought they might have to miss the trip) and then curved northeastward to see what Nova Scotia was all about. Fortunately, all Halifax got was a lot of strong wind -- the brunt of the storm hit further east in Newfoundland and did cause a lot of damage and one death. But it was ironic all the same. Think of Somerset Maugham's tale, Appointment in Samarra!

Mom was in Halfax before so she was eager to return. In between business events, she visited the Art Gallery of Nova Scotia, where she discovered two amazing folk artists -- Maud Lewis and Joe. Norris; the Old Burying Ground, with weathered tombstones from 1749 to 1844; and the Maritime Museum, which houses amazing photos and memorabilia from Halifax' fascinating history -- and just strolled around the historic areas of the town. (Poor Dogdad, who had project deadlines, stayed in the room to work during the day, emerging only at night, blinking his eyes at the world, but licking his chops at the lobster...)

Halifax, with its easy sea access served as the Ellis Island of eastern Canada -- welcoming immigrants in the late 19th century and in the post-war periods in the 20th. When the Titanic sank, people from Halifax were the first to help retrieve those lost in the shipwreck. Conversely, when two munitions ships collided in the Halifax harbor and caused severe damage to the town, the people of Boston extended their help and the two cities still have strong ties. Every year, the people of Halifax send a large Christmas tree to the people of Boston in gratitude for their assistance. The region, as the folks can attest from their drive through the countryside, is the Christmas tree capital of Canada -- and perhaps the world.
We have lots more to say -- with pictures -- about Halifax and the other places our humans visited and about how much they enjoy Canada, but blogger is being a pain in uploading photos -- so we'll be back when we figure out what we're doing wrong! In the meantime, we're just happy to be home!
Jake and Just Harry
Posted by Jake of Florida at 8:32 PM

Looks like your humans had a wonderful seafood feast in Halifax. Hope dog camp food was just as delicious :-)

OOohhhh you were in Canada eh! We love Nova Scotia.. well really we haven't been there but they have.. and they did ht same things.. eat and stuff.. which is all they really do anyway.. so why couldn't we come? Just asking.. Love A+A PS PL2 said to tell your Mo that Mike Lowell is retiring cause of his hip and stuff and she is very sad. Love A+A

Oh, all that food looks so good - bet your mom and dad really enjoyed it. Mom wants to go there one day, we wish we could too - we would love to meet our Wolfie furiends, Guinness and Groucho.

We will be back to see more of the trip.

I guess your food at the camp did not taste as good as those delicious things your parents enjoyed!
Glad they had a great time there!
I hope you two too!
Kisses and hugs
Lorenza

We're glad you're home, too. And we're glad they're home. And we're glad they enjoyed eating all that yummy sounding food. And we hope they brought you some lobsters, 'cause we just happen to know there are some great lobsters for dogs. (You ARE dogs, aren't you?)

Hi Jake and JH
Wow that seafood looks good. Gail is currently drooling Mango like volumes of slobber (not a pretty sight, I can assure you). To bad you were in camp.
But that was a most well timed parental visit to New Scotland, I must say. Definitely increases your chances of being accepted onto my canine science field class. So do keep up with the training programme (note the spelling). Some of our hills are STEEP.
Toodle pip!
Bertie.

OMG, we can't stop drooling! What a shame that you guys didn't get to go along too! Next time, right?!

Given recent history, are they having trouble finding places to host this convention? Wow!

How cool that they get to go to such a great place each year!

Mom has drool all ovFUR the laptop!

Hugz&Khysses,
Khyra
PeeEssWoo: She says thanks fur the khongrats about Monday night!