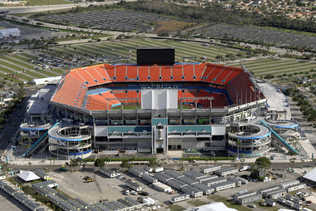 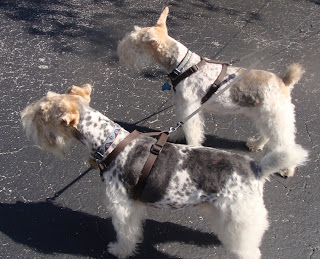 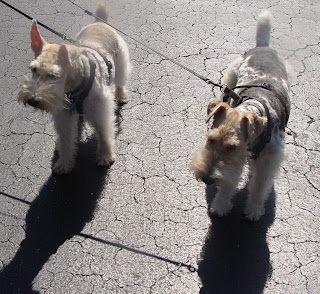 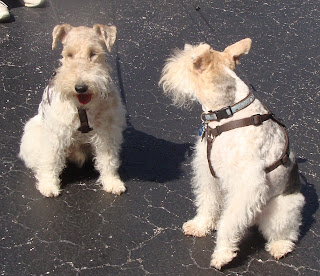 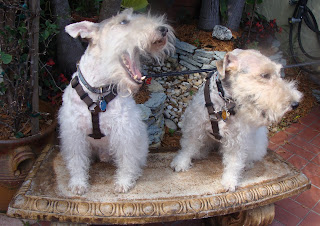 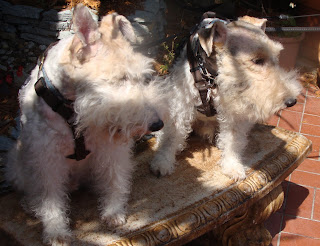 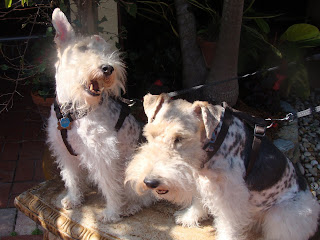 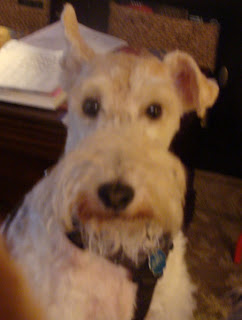 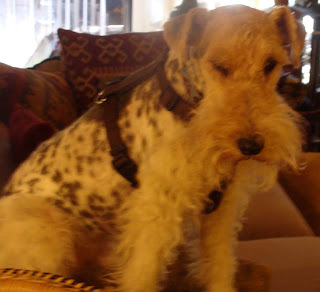 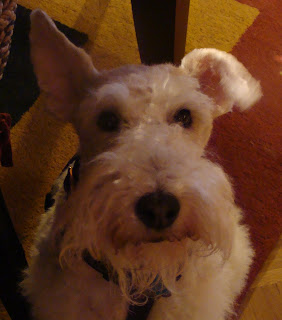 We're ready! But let's not forget about those others who need our help!! Jake and Just Harry
Posted by Jake of Florida at 5:34 PM

I had completely forotten that it was happeningin Miami this year until a friend reminded me yesterday! I almost went to run errands up there but glad I did not 'cuz I hear it was crazy. Yeah, I feel a little more strongly for the saints being in the southeast at least.
Stay warm without your coats. It is supposed to get chilli this week! You do look cute though. Who knew you were so spotted!

Hey Guys...the excitement has started and the delicious smells must be wafting your way. We lived a mile and a half from the stadium in Tempe, and we could smell the hot dogs, even though the hoomans couldn't.

What we didn't enjoy were the dam*ed dirigibles. They made the scariest noise when the fired up their burners. Oh, and speaking of burners, if there is a Blue Angel flyover, make sure you have your paws over your ears before they kick in the power climb!

Ah well, you will do just fine if you stay close to DogMom and DogDad. Maybe you can score some foodables, too.

You both look great with your new haircuts - hope it doesn't get too cold there for you. And oh, those ears - gotta love 'em:)

What is it with the peeps and the fur removing? They shaved my hairs off Friday too! And it was downright chilly here in the Tampa area today. Brrrrr! I betcha can hear all the super bowl hoopla from yer back yard!

You two look so slim and streamlined with your new haircuts. Did you make some yarn from those sheared coats? (May need to knit a sweater if the temperatures dip again!) I had to wear my hoodie to the beach today so I just ran into the ocean and plopped down in it! Ha!

We really couldn't care less about the Super Bowl...now the Oscars on the other hand...

We don't do the N** bekhause of V*** but had we watched, we would have pulled fur The Saints -

Two big events happening there, right?
I wish the best for the people of Haiti.
And I am happy that the Saints won!
You two look great with your new haircuts!
Take care
Kisses and hugs
Lorenza

We are just THRILLED that the Saints won the SuperBowl! whoooooooohooooooooo
Both of you look so spiffy with your shorter haircuts!

We aren't much into the Snooperbowl around here. Our mom watched the Puppy Bowl on Animal Planet! (Oh, and the Ghost Hunters marathon)! She's kind of weird! We hope the airplanes and blimps didn't scare you too much! Our mom is talking about Aire-cuts, but says it's still too cold. It is 25 degrees this morning!

Boyz. wagging to see you around again. You look darn handsome as always with your new strip. Hope your team wins!

Could you guys hear it? I am sure the pups did :) or at least smelled all the food!

Hey Guys! Man, are you lucky, or what? Miami...home of the Super Bowl that made history.

Loved the comment on my blog that "no terrier is ugly". True, indeed. I can't believe I said that about myself considering how vain I am!