Couch Pawtatoes -- and an Award

Now that it's started to thaw a bit, we've gone into the photos from our holiday road trip and, as promised, will be providing a series of vignettes.
The first one is called COUCH PAW TA TOES...
Here am I on our first stop in Orlando -- wondering what's happened and why my bowl of food isn't in the right place -- or even if it is my food. 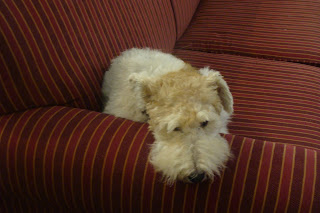 A few days later, we found ourselves in a cabin in Monteagle Tennessee, where we got the first suggestion that we were not in Florida anymore. It had rained a cold rain the whole time we were on the road and we were wet and hungry -- and I was still wondering why my bowl of food was not in the right place. (Mom's note: when we travel, it takes a few days for Jakey to accept that the food in his bowl is the same food that he gets at home, and is in the same bowl. The addition of pumpkin somehow overcomes his reluctance to eat -- but it takes a bit of patience.)

Once we got to Grandma's in St.Loulis, things seemed to fall into place. We found our spots on the couch -- in between walks in the increasingly frigid weather (subject of a future vignette). 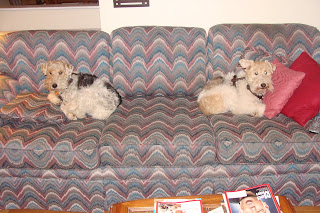 After Christmas, when we stopped at our human brother's house in Athens, Georgia, we discovered that our cousin Marcy, a beagle/perhaps pointer mix, shared our love of couch curling. 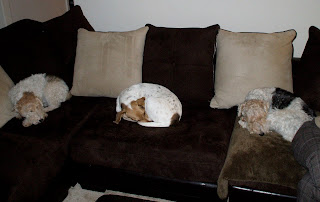 And...Ah, but what is this????? Whippets? Paws akimbo on a couch? Dogdad took this photo of a photo at the AKC Dog Museum -- as a surprise for the waggle. 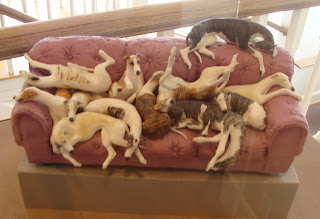 A few days ago, Moose, who also has been bearing up with the unexpected chill here in sunny Florida, and has reported that he too was aware of falling iguanas, honored us with the Superior Scribbler Award. We tracked the award down to its source, and found that it has an unusual history. We'll describe that in a few days, along with the rules, but in the meantime, we wanted to thank Moose for this flattering, much appreciated, award. 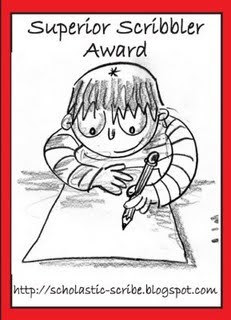 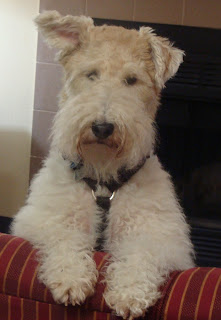 Your pal,
Jake of (chilly but slowly warming up) Florida
Posted by Jake of Florida at 6:02 PM

Jakey...Aren't hotel couches the funnest? I have found oodles of snacks (and a few things muzzer prefers not to mention) and now the first thing I do is check out behind the cushions.

Hope your luck was as amazing as mine.

Unkhle Paul had his furst hairkhut there when he was a wee one!

Mom and her furmaily were travelling with her dad on some business - they stayed there fur a few days - my Doggy Nanny finally decided Unkhle Paul's ringlets had to go!

Tank woo fur sharing your adventures from The Road!

that is some awesome couch potato action!

You seem to have no problem adapting to different couches.

We think you two are a great accessory to any couch - and with as cold as it has been, it is a great place to snooze and snuggle. Congrats on the award.

You guys are curled up so tight you could be mistaken for couch cushions if you are not careful. Can't wait to see more pics!

Beautiful pictures:)
Do you both have your favorite sides on the couch?

I'd like to thank Dogdad for the Whippets pic:) 12 of them! You won't believe that a couch could accommodate all - until you've seen that picture.

You totally deserve both awards. Excellent couch curling too. Moose has never questioned a bowl of food. I think he has one of two thoughts when he sees a bowl of food. 1. Oh that is my food it looks awesome and I will eat it really fast. 2. Oh that is not my food. It looks awesome so I will eat it really really fast before momma stops me! The labrabrain is simple but functional in this respect!