For Just Harry to Celebrate His Gotcha Day!!

"Mom" here, using my rights as keeper of the computer to celebrate that funny little wirey boy we call Just Harry.

First a bit of history for those he's just met.
The years do just fly by. On September 10, 2005, as some of you already know, Jake and Jack and I drove to Orlando to meet a young wire fox terrier who had been rescued after he was abandoned when Katrina struck Florida before moving on to ravage the Gulf Coast. 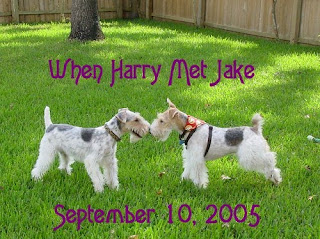 We met at neutral territory at a friend's home --Brenda, who has two wires of her own -- Jack and Alle -- who some of you may also know. 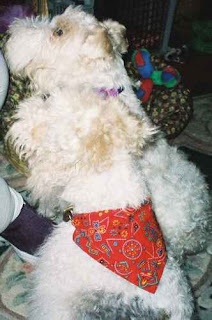 We all gathered in her living room, waiting impatiently for the guest of honor. And then he appeared- an adorable puppy named Harry -- about a year old and, as Jack likes to say, a nervous sort.
Jack and I and Brenda went outside with the two boys -- to see how they would get along. And when no one snarled or growled or did anything untoward, we figured, "That's it!" 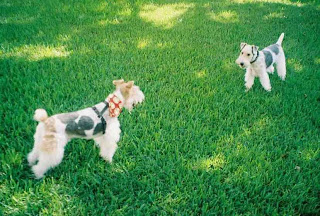 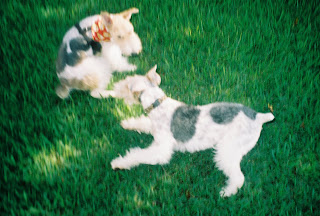 We headed for home -- Jake on my lap in the front seat and Harry in a crate in the back. He was quiet for the whole three-hour ride. When we got home, we thought he'd sleep in his new crate downstairs -- but no sooner had we gone upstairs than he began to bark. So upstairs he came -- and that's how it's been ever since -- although he's younger than Jakey, he's the lead somewhat high-pitched voice of the Barkalot Boyz

How did Harry turn into Just Harry? It was a "J" thing -- and when a friend suggested "Just," from Harry Potter, we thought, how perfect. Especially since I had read that Prince Harry, when asked how he liked to be addressed, replied, Harry, Just Harry!! 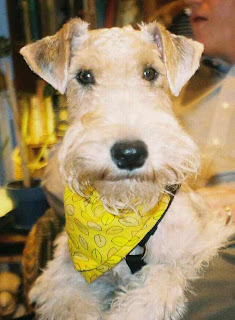 For the first months, JH was scared of so many things - umbrellas, little girls on bicycles, loud noises of any source -- that we worried about his early days. But he and Jakey had a lot of fun playing tug-a-dog and getting to know each other. 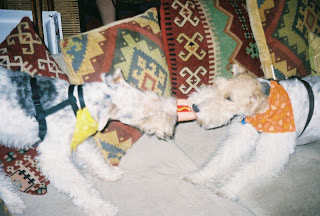 The first time he heard fireworks, his tail tucked under and his legs went limp and we had to carry him home. He still hates noises - which isn't unusual for many dogs - but he's learned to walk under an umbrella and the only outside thing that still sets him off is a little white dog who lives across the street -- we think he thinks she's a white squirrel. When she gets walked in the morning. he and Jake -- staring out the window from the bedroom -- start to bark in harmony -- no need for an alarm clock. And when we've had enough and try the LEAVE IT! routine, JH's bark turns into his own melody that's sweet and plaintive and almost heartbreaking. I call it Harry's song -- and one day I'll record it. (It goes on for about five minutes.)
But what is he really like? You all know Jakey -- Mr. Confident. The Weatherdog. The Spokesdog. The Chair Man. But who is Just Harry? 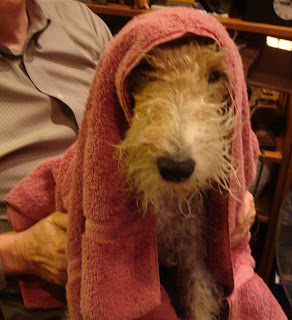 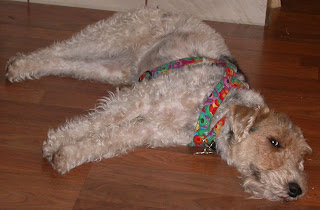 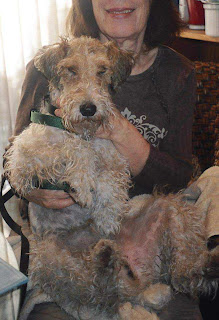 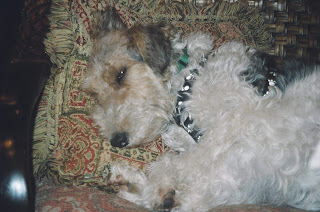 Occasionally we call him the Doofus (even though that title is taken). But he's smart enough to know where home is on the few occasions when he's either run after the UPS truck or bolted at an unexpected firework explosion and wound up back at our front door.
He's a lover, a licker, and a lap sitter. His muzzle still trembles at the slightest provocation -- and if he thinks something's awry, he runs under the very low coffee table to wait it out on his mat there.

He's an astute thief -- coveting whatever toy Jake has and plotting his strategy for that moment when Jake puts it down and he can steal it in a flash. It's hysterical to watch him watch Jake, then inch his way over and around to the perfect vantage poin for the theft!!
And just one more tale: Jake is usually the one who asks for his breakfast and dinner. He does it quietly, either with a slap of the paw or a stare and the unique tongue lick of his lips. Just Harry knows to run to his bowl when we ask Jakey if he's hungry. But in recent months, he's decided to take matters into his own paws -- and he'll come over to me and bark and bark and bark. Clearly emulating Jake in his own way -- although usually without the same success
He's had so many fun adventures and assumed so many personas -- 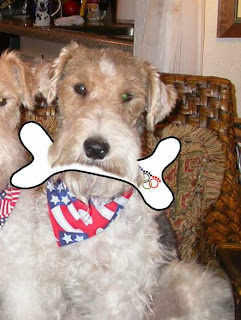 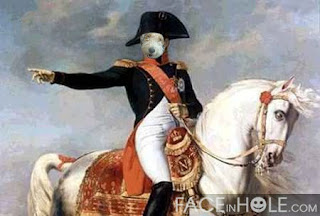 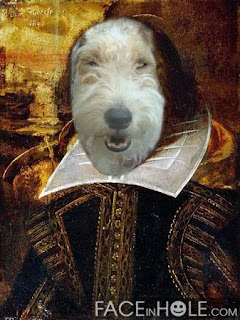 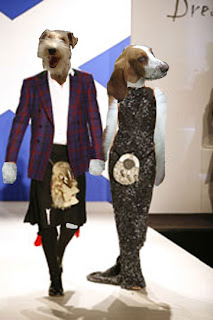 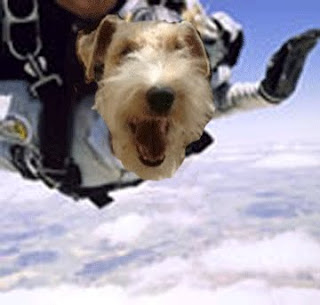 But he hasn't lost his boyish enthusiasm. When it's time to go out, he stands close to the door with his tail wagging a mile a minute and his muzzle all a tremble-- am I going too? am I ? am I?
To me, one of his most endearing traits is when -- all of a sudden in mid-morning or mid-afternoon -- he decides that I'm lonesome and comes over to my computer while I'm working just to say hi!! Not for food. Not for treats. Just to say hi! A few scritches and he's gone. But it makes life so much nicer.
So Happy Gotcha' Day, my sweet Just Harry. We are so happy that we gotcha'!! 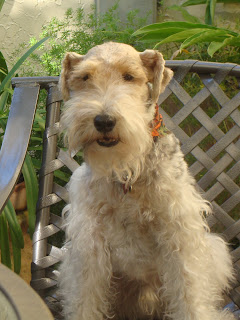 Mom is sitting here with THAT googlie face!

Harry,
You are loved very much. Your Mommy and Daddy love you. So, happy adoption day to you.
Sally Ann

A fine addition to a wonderful family.

Just Harry...... I am happy to see that your humans realize how lucky they are to have rescued you !
Kisses, Faya & Dyos

HappyHappy Gotcha Day JustHawwy!!!!!
I love you and loved heawing all those tales about you. I've heawd soe befowe, but othews wewenew to me, and I nevew tiwe of them. You awe a special, wondewful boy and I'm so vewy happy that you adopted youw bwofew and youw pawents and made my life wichew by being my fwiend.

Nothing Just about you !
smoochie Gotcha Day kisses
ASTA

That is such a lovely post.
It's nice to be reminded of this special boys story.

What a great read! Nice to hear about doggies finding good homes.

My grandpa angus was so scared of umbrellas that he wouldn't even step over a closed one (good way to keep him out of rooms).

Happy gotcha day Just Harry mate. You sure are one lucky boy to have ended up there. This has been a pawesome post.

Happy Gotcha Day Just Harry. We loved reading about how you came to live with your family.

Oh, Just Harry. We are so glad that they Gotcha, too! This was a wonderful recount of "your story." We loved every word of it. We are so happy you were rescued and rehomed and are now part of your family. Welcome home, again, JH. You are right where you belong!

What a lucky Just Harry!!!! Happy Gotcha Day Dude!!! We love you and your brother. You landed in a great place!
Hugs
Sunny&Scooter & Jamie, too

wags from your buddies the whippets

What a lovely story JH! I had heard part of it but not other parts like where you got your name (and I have always wondered) that is awesome!
You are one lucky pup and it is nice to hear of a nervous sort of dog who has settled into a new life so well!
Happy Gotcha day indeed!
And eee-yikes we had not thought about pythons when we wandered into that bog! Luckily we did not find one!
Moose + Dana
p.s. I am sure Jake the weather dog is relieved that we have made it to the half-way point of hurricane season with nothing to report!

Happy Gotcha Day, JH!! What a sweet ragazzo you are, il mio amico. It's no wonder your famiglia adores you hoooogely! La mia ragazza and I are very glad that they "gotcha," too!!! Muahhhh!!!

w00fs, nice to hear how we all come to our families..i thinks urs got a winner when they picked u...have a wonderful gotcha day..wiff ice cream..and have many many more..

What a great post! Too often we read all these wonderful tributes when our sweet pups are gone - we loved learning all about Just Harry. We are so glad he has a Happy Gotcha Day with your family.

Happy gotcha day, Just Harry! What a beautiful post! We hope you get a treat or two on your very special day!

Happy belated gotcha day. Thing have been busy at the house.

Your bestest friends in the Keys

Harry. What wagging stories. Love 'em. Nothing just about you. Sorry I'm late in wishing you a Grrreat Gotcha Day you cool dude.Hope it was full of lots of barking and stuffies. Cake and Ice cream too. And good wiry loving. I send you oodles from all in this square dog house to you and yours in yours! Happy Gotcha pal.

We loved learning more about Just Harry, thanks for this great post. HAPPY GOTCHA DAY BUDDY!

That is such a nice story. I only wish Millie and I could've gotten along like you and Jake. In the end though she found a wonderful home with two parents who spoil her silly.