Just Harry Has a Request 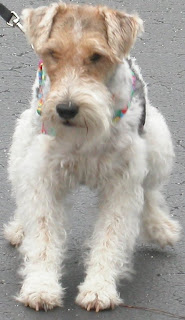 This is really hard for me to write -- but I have to tell it like it is. Despite our romantic moment at the Rainbowwow Room, I have had to conclude that Princess Willow is just not that into me. How sad is that? Mom has tried to console me. 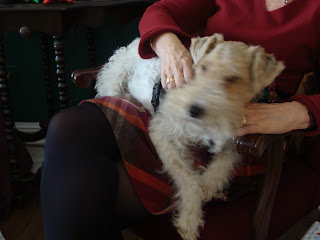 But, like my brother, Jake, having experienced a moment of joy with a lovely lady, I think I'm ready for more of a reciprocated relationship. Chew bones just don't do it anymore. 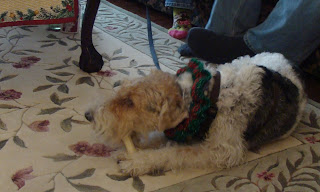 So here it is: I would love to escort someone to Myrna's wedding, and if anyone out there -- who may have read my posts and seen my photos and enjoyed my antics -- thinks she'd like to be my date -- well please write to me ASAP.
I've already booked seats on AireRiby -- or rather Jakey has done it for himself, Gabbi, me and Miss Unknown, and our two wheelie look-alikes -- Professor Jacques Maigret and Justin Herkimer Clouseau. (I know, they've been really scarce since they immigrated to South Florida from France -- but they can't resist the opportunity to revisit Europe for such an extraordinary event.) 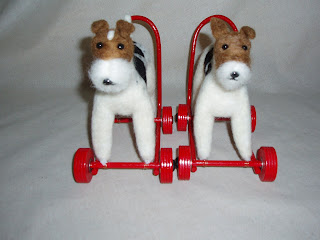 As I said, this is really hard for me to write, but I guess I'm maturing beyond that first intense crush!!! 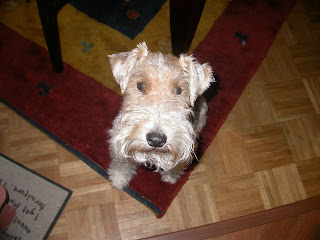 Lots of wirey love for the right lady,
Just Harry
Posted by Jake of Florida at 9:44 AM

I'm sure the right pot fur your lid is out there!

If I wasn't already involved with three men of my own, I'd throw my tail in the ring!

Oh Harry
That was a sad story. We are both attending the wedding and will look forward to seeing you there.
We discussed dates and boyfriends and were not sure either of us was ready just yet.
As for your question about us being Aunties - Bailey who is 5yrs old became very concerned for Rosie going off to Bermuda with Petey. Well she is such a young, impressionable beagle and Petey is so much more mature. Bailey was a bit worried and went as chaperone. Being basset hounds we are kinda related to beagles and the next thing Bailey was known as Auntie Bailey.
Now I am only 2yrs old and will be 3yrs sometime in the summer. Because I, like Bailey, am a rescue I cannot be exact! Somehow we both became Aunties - we like to think it is because we look so wise and mature!
Anyway we really dont mind. Keep in touch Harry and perhaps we can get better acquainted.
lots of love
Martha xx

Well, dear Aunt Martha beat me to it, I was going to suggest her, she's a real sweetie and single....
What about Honey the Great Dane? She's a very good friend, she's a leggy blonde, she's a MODEL!! and she happens to be a great dancer too, she might appreciate a twirl around the dancefloor! (she's the one Ludo thought Jake was into when he mixed you guys up, she's in our sidebar, Petey knows her too)
Good luck Harry, my paws are crossed for you :o)
Slobbers....and extra smoochy kisses for your brother *blush*

What about sweet and lovely Koobie? I think you guys would make a great couple. I am already on her Grandpa's good side, so I could put in a pawsitive word?

Just Harry, I would so totally be your girlfriend, but you couldn't be #1, because that's Joe, and #2 is sort of Wally, and I am having several affairs, one of which is a cat named Merv who lives in Gooberstan.

If you don't mind feeling a little crowded, I can certainly make room for you.

P.S. We are thinking of late May for NY. Stanley himself is planning to be there, so we might go meet him. We're not sure what his dates are though.

What about the lovely Kerry Blue Terrier, Persephone? Or Suzuki, she's still single? Mitch's sissy Maggie? Golden Samantha? There are lots of beautiful single ladies out there.....:o)If you don't already know them we'd be happy to help break the ice for you....
Ooh, keep us posted won't you?
Slobbers, Gabbi & co xx

Hi Just Harry! I hope you find the lovely lady of your dreams. I'm so lucky that sweet little Lacie thinks of me once in a while. To answer your question, Poopy Park is what the regulars call Emerald Hills Lakes Park. It's between Stirling Road and Sheridan Street just west of I-95. A lot of comments have said to watch out for that one dangerous dog, but the trouble is that there are always new dogs and any of them could be dangerous. It seems safer not to go.

Hello jake and just harry - thank your mom for trying to provoke misery mistress into action. If only.

I am doubly depressed now on reading your comments as I see I don't even get a mention on Sophie's rankings.

Anyway, I will try and get misery to put up a post to say we are not blogging!!

We'll try and catch up with you. I thought I had your email but may have lost it on one of my reinstalls.

Maybe not. Can always leave me a pm via bonezone, or are you on facebook?

Anyway, we are all very tired here now, so night night.

Oh Harry,
I have made my reservation on air-Ruby but I don't even know if I will have a friend there to dance with....no news from George....not even a "wooooof"....I am so sad.
And what about little Taky ? She is so sweet....
Kisses, Faya

You awe going to bweak my heawt. I can't believe no bootiful giwl has been dwooling ovew you. I'm suwe this will change vewy soon.
(Mommi has copied the pictoowes of youw wheeley lookalikes, so no need to send those pictoowes, hehehehe)
Don't wowwy, you will have the love of a bootiful giwl by the time of Mywna's wedding. ( I think Mawtha is quite gowgeous pawsonally, but I don't know youw tastes, and thewe awe many booties out thewe.)

Just Hawwy
I just wote a hooge note, and it disappeawed..GWWWWWW!
I love Mawtha and she'd be a gweat giwlfwiend, so would Honey, I think Koobie is taken, but thewe awe so many gowgeous giwls, I'm suwe one will be dwooling fow you soon
smoochie kisses
ASTA

Harry, Harry, Harry...Now Butchy asked me and I'm pretty sure Archie will too...but I do have four paws...so if you'd like to be my escort along with a few others, that would be totally FABBERS!! Honestly, Harry, I have no idea why we haven't gone on a date before...just the two of us...plenty of time before the wedding!!! Call 1-LAC-GIR-LIE!

Pee ess...try Maggie of Maggie and Mitch...she might go out with ya!

Hi, Just Harry!
Be patient! I am sure Miss Right will be at your side soon!
Kisses and hugs
Lorenza

Hmmm ... I was going to suggest Koobus, too, but if she already has a date, what about sweet Sally from London? Or Sally G? Or, if you're like I am and have a weakness for those bellissima Kerry blue curls, what about mio dolce ragazzo's sorella, Persephone? She is favoloso!

I would love to be your date for the wedding but I don't know the bride or groom and you might think I'm too old for you. I think I'm 6 or that's what Mommy thinks.

Thanks so much to your Mom for understanding Mommy's feelongs. I wish we had some lantanas in our yard. Mommy hasn't seen any in such a long time. Maybe you could post some pictures f your lantanas sometime or send Mommy some pictures. It is so sweet to know you gys will think if us whenever you look at yours.

Hi Harry
I run my own Lookin Fur Love Business. Maybe you should stop by and check out the current "singles" I have on file?
Hugs from the Stud
Scooby Doo

There are tons of girls out there for you buddy. Oh and um, Sophie is MINE. ok sorry, I get a little possessive.

You are such a handsome boy, JH and any pretty Terrier girl would be lucky to have you as her sweetie! Our paws are crossed that she reads this note and rushes to your side!

I would've loved to attend the marriage with you - but you are on the other side of the globe. So, will you gallantly dig a tunnel across?

But don't worry. I am sure that a handsome dog like you would have girl-dogs swooning.

J.H.
I happen to think that you are adorable. It would be an honor to be your date. Of course you would have to be interested in an older gal. I would not take offense at not being picked. I do like to play chase and chew up stuffies.

We are positive that there is a girl out there for you. You seem to have a lot to offer.

Thanks for visiting our blog and here's to a wonderful season of baseball!

Ah Harry, I bets you'll find true love, I'll keeps my eyes on the lookings for you. Tell Jake he be a lucky dog to have Gabbi.
~lickies, Ludo

Any luck on the dating fwont?? I suwe hope so. I've been thinking of you and still can't believe that a faboolous boy like you isn't inundated wif dates.
I'm so glad you liked my post about Mommi and Daddi..I just love LOVE!
smoochie kisses
ASTA

Faya said to me that you are looking for a funny little girl to go to a wedding ...

I hope you will be interessed too ...

I think Lacie will date anydoggie if you really get stuck.

Maybe you should get Jake to ask Gabbi to fix you up with someone - she must know another cutie.