Is De Devil in De Tail?

On one of our wirey lists, the topic has turned to the effects of tail docking on a dog's temperament. Some research suggested that a dog whose tail has been docked is missing a natural way of deflecting aggression and thus, in defense, become more aggressive himself.
The scientific basis for this conclusion is murky. But we were intrigued. As most of you know, I, Jake, have a very short, but sassy tail. My brother has a much longer tail -- although someone who saw it said it might have been docked as well. 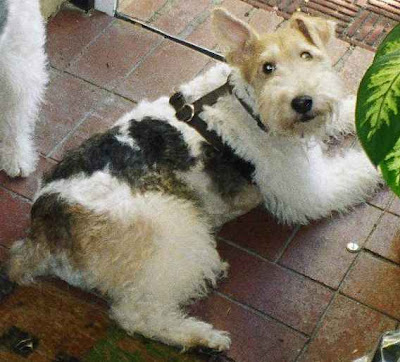 As most of you also know, I am of a serious, philosphical nature -- but sweet and not prone to aggression unless it is a matter of who gets to open the door first, or deal with a CAT...

And my brother -- he of the longer tail -- is more often than not prone to pick a fight with me, although he too can be very lovable and sweet (or so Mom says). 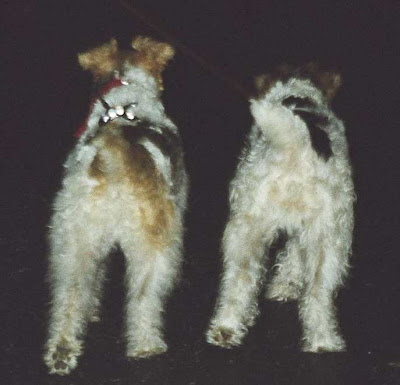 Obviously, we are a less than scientific sample of two. But what do you all think? Does the length of your tail influence your personality?
Jake
Posted by Jake of Florida at 12:20 PM

I have a three-quarters dock and am the happiest dog around! Cap, on the other hand, has a stubby dock and is quite cheerful most of the time (only grumpy with his food bowl). Glynn is in-between and happy, too.

Let me see...wag, wag, wag...nope, I really don't think there's much to it. Maybe it's an old wives' tail. Good question to ponder, though.

Hiya boyz
I've taken your flower advice very seriously today (and mentioned you too).
I think tails are important. I don't wag mine very much but I like to curl it round.
Catz have them so I'm sure we need them too.
Pippa

Hi Jakeand Just Hawwy
My tail is docked, and so wewe the thwee wiwy kids My Pawents had befowe me.
We all had totally diffewent pawsonalities..I am the fwiendliest towawds othew doggies out of the fouw..I don't think the tail has anything to do with it...
Ithink you two have wondewful tails and the cutest bum bums evew!
smoochie kisses
Asta

Well Cassidy has an undocked tail, and she's sweet (did I just admit that?!). I am docked but am also a very friendly guy. I can'ty think there's much in the theory really, too many other factors are also involved in shaping our temperaments.

Well, pawsonally I think this is all hooey. Kind of like short men overcompensating and having a Napoleon Complex thingy.

I like my tail. I would hate to lose it. But then, I hate having my back brushed and losing my hairs too!

This topic has been on our Airedale list too. Mitch and I both have docked tails and neither one of us would hurt a flea! I might get bitchy once in awhile but I'm an older girl and it's my right! We think this theory is pooey!

We knew the sweetest bulldog in the world and she didn't have any tail at all: it was an innie!
We never saw a dog turn around and look at his or her own tail when they were wagging or flagging or sagging, did you guys?

we think we're with the "hooey" vote.

long, skinny wags from the whippets

I have a docked tail, much shorter than most other WFTs I have met, but not as short as yours Jake. I am in a good mood almost always and it is always wagging. My mother tells me to stop wagging my stub.. but, I cannot. I feel it expresses my innermost feelings quite nicely.

I have a long kinky tail, that is just how boston tails are sometimes. Tanner's is tiny and barely moves. I am not saying that you might compare that to our brains....

As long as you have enough to wag. Wagging is very important to dogs. I don't like the idea of dogs having their tails docked for appearance. It must hurt.

First off let me say that you BOTH have very sassy tails...

I'm docked too - they say that mine is a wee bit too short and stump-like - and I can't think that my stump has anything to do with my occasional aggressive tendencies. Because, in fact, whenever I get grumpy at another dog it's just because he deserved it (and yes, I still believe the sun revolves around me). :)

I do have to say that the "natural" terrier tail is kinda growing on mama (she's always like the docked look), the way it can curl around and all.

All that said, I just think yours are cute :)

Reilly has a docked tail (it happened before we got him) and he doesn't seem agressive, BUT we do notice that others dogs aren't usually as nice to him as they are to me. The lady thinks it is because he can't tell them with his tail that he wants to play, but we're really just guessing here.

Our tails are both docked, but mine (Poppy's) was cut one joint too long. Mom thought about having it fixed, but before she had it done, it became part of my personality, so it remains the same. I don't really think it matters as to personality, but the longer they are, the more of a lethal weapon they are!

Hmmm interesting theory. Well Willow, Tess & I all have docked tails. We have different personalities. Willow is sweet and wouldn't hurt a fly. I'm aloof and only get the cranks if provoked. Tess is tough with a strong personality, not great with small dogs but beautiful with people. Lucy wasn't docked. She is the toughest of all, top dog amongst the girls. I don't think that theory applies to us. We're all too different.

I see the tail dilemma that you guys find yourselves in....we have the same problem in our house...my Mom, Asta Marie, got tail butchered by a dumb vet who thought she was a schnauzer not a fox terrier and she has a short tail just like you....now I...Dewey Dewster.....have a docked tail too but mine is longer....however I have some really strong tendons in my tail and it curls over my back. Then there is Toby, the red-headed stepchild Gram adopted recently...now he has the kind of tail I wish me and my Mom had....but then we have more brains so it was a fair trade-off...see how easy that was? Don't be confused and don't feel bad cause nobody's perfect.

Well well well We are here to say that that is a bunch of baloney...Agatha has an undocked tail and is a witch at times,and Archie is docked and is mr lovely boy but can be agressive with some other dogs,,,go figure..Love A+A

Hey Jake, you have sure settled down since you got a brother, my mom says no way will she get one for me, even if it settles me, i miss our antics, i am still at it, hot and heavy,

We vote for HOOEY!!!

Hmm..that will keep me up tonight.

I have a nice short docked tail and I'm a big lovable galoot my mom says.

Well, we Kerries have a "slightly-docked" tail (back in the old sod and in the UK, the tails are a little longer), and truthfully, we tend to be aggressive and obnoxious no matter what the length! It's kinda like asking an Irishman in a pub if he's more prone to pick a fight when he's drunk or half-drunk ("You callin' me drunk?! I'll show yer!!!").

I dun think the tail has anything much to do with our personality. Maltese do not have their tails docked but a lot of them are very aggressive and will bite even their hoomans.

Hey pals, it looks as though both your tails have been docked. I have a long luxurious tail, but I'm quite grumpy. My tail never stops wagging or quivering! J x