Strike Up the Egret! 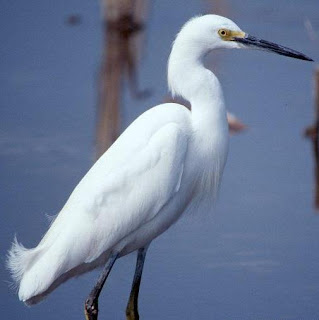 When I'm at camp, I practice jumping as high as I can -- without bonking my head on the ceiling of my quarters -- to see what I can see. This time, when Just Harry and I were at Dr. Dan's for the weekend, while Mom and Dogdad drove to Tampa to attend a college football game, I tried something different. I found that, if I employed a special "egret-cam," I could see what they were up to all the way across the state without my usual jumping. (Full disclosure: the idea of an egret-cam was not my own; my pals Ms. Gimlet Rose and Sammy suggested it. Or perhaps it was Celestial Nigel.)

My human brother is an assistant director of the University of South Florida's marching band and the folks had promised to attend one of the games to see him and the band in action. For a few weeks, USF was near the top of the college teams, so the game promised to be exciting. But sadly, they lost this game to the University of Cincinnati, as well as their two previous ones, and they dropped off the charts (although they still have three more games to play). 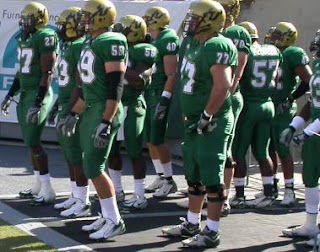 Despite the loss, it was a beautiful day in Tampa -- and the folks actually RELAXED, something they're not very good at. And despite the loss, the game was indeed exciting, especially the last quarter. During that quarter, Mom and Dogdad sat behind the band, right next to two rows of tuba players and really got into the TEAM SPIRIT. It was TUBALICIOUS!!! If those tuba players could have affected the outcome of the game by the way they blew into their instruments, the score would have been very different! Our egret-cam vibrated with the noise and we could hear it all the way across the state!!! 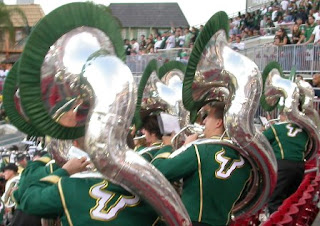 For those of you who haven't been to a college football game, there's a tradition called "tailgating." That's not when the car behind you gets really close to your rear bumper; rather it's when you and a bunch of friends bring lots of food several hours before the game, open the trunk of your vehicle, set out a spread of food, and drink lots of beer... 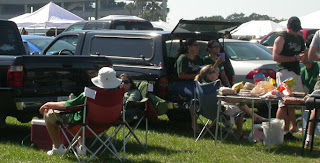 According to Mom, who went to an all-girls college, attending a college football game is an out-of-body experience. Everyone is dressed in various versions of the team colors -- in this case dark green and gold. Some fans paint their bodies in those colors and, because this school's mascot is a bull, some even wear horns. 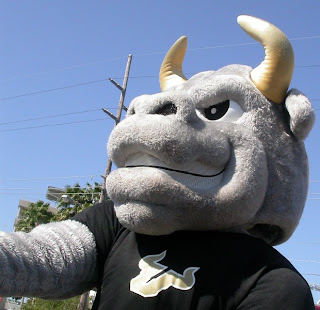 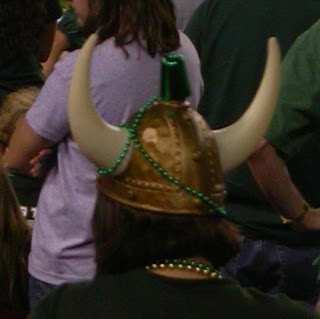 No bull, is this a great idea for our next costume party, or what???

So, thanks to our innovative egret-cam, it's as if we were there!!! And now, fellow dogs, you too can see how humans amuse themselves!
Jake the Dog
Posted by Jake of Florida at 4:42 PM

Wow..can your mom and dad still hear OK? Cool stuff. My dad says muzzer only goes to games for half time and the food. I think she's got the food part right, but to me, half time means go out and raaaace around the yard.

Where is everybody? Doesn't anyone want to know how an egret-cam works??

A bull costume party, is there a hidden message there? lol

I want to know how the egret cam works!!! Is Dr. Dan your vet? Is that where you go to camp?
Looks like your family had so much fun. My parents went to Ohio State so they love football and tailgating and marching bands! They are musicians too. Cool!

Hi boys! Is that some new technology? Do you have a little cam on the head of an egret? That, my friends, is a splendid idea!

Egret-cam... You find a friendly egret (ours is named Fred) and you ask him if he'll wear an egret hat with a camera attached. Egret hats are sold at Publix (a Florida-based grocery chain) and are similar to Flamingo snoods.
OK?

Hey Boyz...
How are you??? I'm so sorry for not being around...it's just been so crazy lately and Mom has been real busy too. Hey, we're going to be in Disney World this weekend for Suki's Barkday...wanna join us? We're staying at Cinderella's castle. We really need you guys to be there!!!

Oh and what the heck IS an egret cam??? Inquiring minds want to know!

Ruby here...it's FL DisneyWorld!!! So real close by for you boys!

We'll be there starting Sat night thru Sunday night - Woot!

We have lots of egrets here, now all I need is a camera and some super glue...

Hi Jake and Just Harry
My Daddi says college games awe much funnew that the pwofessional ones..I would especially like the tailgating stuff.
No one intewviewed us about the jail conditions..i think they wanted to ,but we wewe so busy wunning awound and shopping we didn't have time to answew any questions...a missed oppowtunity to be famous..oh well..we had a gweaat time..I wish you would come visit some time
smoochie kisses
Asta

Hey Jake and JH. We fixed our guest book, but you had already signed it, anyway! We are very interested about how the egret carries the cam! Can't wait!

Thanks for introducing a whole new word into my licious vocabulary! Glad the egret cam could pick up so much detail!

Hope this weekend is even more tubalicious for you & the peeps!

Wow it looks like a grand event. We never have such grand football match in Singapore. Are dogs allowed to go watch the match?

So are you going to explain the egret cam? Please?
I'm not to fond of football or any sport really, but tailgating looks fun. I enjoy any activity where lots of food is involved! J x