But Where Were the Dawgs???? 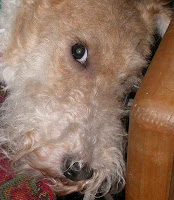 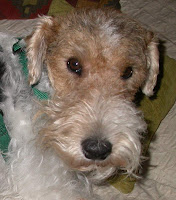 J'accuse!
If you were having a wedding, wouldn't you want two adorable wire fox terriers to share in the celebration?

Sharing sand fron the beach in a Unity Ceremony. 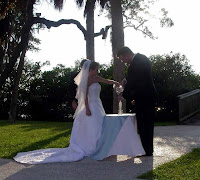 Our brother and new sister-in-law. 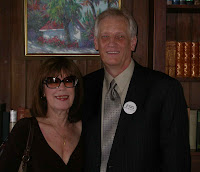 Mom and Dogdad (aka FOG - Father of the Groom)
___________________________In case any of our new friends noticed we haven't had much to say since July 4th. Here's why: Mom and Dogdad took us to Dr. Dan's Animal Clinic (aka Camp) on the 5th so they could drive across the state to our human brother's wedding at a beautiful park in Sarasota, the Philippi Estate, over the weekend. 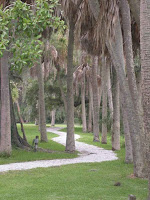 We wanted to go, we really did, but it wasn't to be. Nevertheless, we did have a good time doing what we like to do best: bark our heads off with the 20 plus other dogs who were at Dr. D.'s while their own humans were away over the long weekend. (So many dogs were getting picked up this morning, we had to stand in line for our baths!!)
But we're back now, and got to see some of the pictures the folks took of the wedding on 7.7.7. The highlights:
No rain, even though it had rained every day straight for the last few weeks.

A breeze so no one fainted in the 90 plus temperature.
Live music because the groom is a college band director with lots of friends who came to play - trumpets outside, then "big band" inside the mansion after the ceremony. 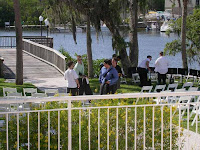 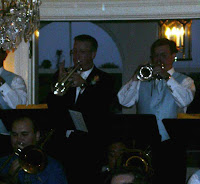 Musicians arriving to set up and practice. Later an awesome "big band" sound!

One of two cakes.

Lots of relatives: Three sets of grandparents. Four sets of parents. Many sisters. Aunts and uncles from St. Louis.
Lots of friends, musicians, and students.
With all those folks, how could anyone have minded that two fun-loving WFTs like me and my brother were celebrating too?
But never mind,we're home now, and about to do what we always do when we come home from "animal camp": snooze for three days to recover from all the excitement -- the barking, the late hours playing poker, the fun with the people there who have known me since I was a 4-month old puppy and love to play with us.
Hope everybody is staying cool!

Jake
Posted by Jake of Florida at 2:03 PM

My parents left me to go off to a wedding the other weekend too, harumph!

The bride and groom do look gorgeous though. Still, I fail to see how you couldn't have made their day that bit more perfect.

congratulations on marrying off another human family member. Sorry you didn't get to go. Muzzer has told E.Rabbit that when she gets married I get to have a kilt to match Dad's. I think I am set on that one.

Glad you had a good time at "camp"

Jake,
you and just Harry would have made an awweady bootiful wedding even lots betterer! Gwanted, the bwide and gwoom looked good, and so did the cewemony, but I'm suwe the band would have been impwoved with the addition of your bawking
stay cool, and welcome home
smoochie kisses
Asta
pee ess. Gussie loves cwunching ice just like we do, so maybe it's a WFT thing

One of TWO cakes? Well, I hope they brought you guys the other two cakes to make up for their omission!

Ooops, the other ONE cake I mean. I was fantasizing about three cakes.

Certainly you could have been ring bearers. What were they thinking? Nothing lends class to an affair like a wire fox terrier or two!

Yours in support-
Libby & Linus

Geez guys,
No fair you weren't in the wedding & didn't even get to go see it. Our Mama could have even made you little tuxes to wear, hehehehe. The cake looks so bootiful & yummy. Did they bring any of it home for you?? Sure glad you had fun at dog camp though. Rest up ok??
Luv & Wirey Hugs!
Butchy & Snickers

Hi Jake,
Axel here from Philly. My parents got married just over a year ago. And what did they do with me? Stuck me in doggy day care. Don't get me wrong, I love doggy day care - but I really think I deserved to not only be at the wedding but in the wedding party!!!
I am going to add you to my blogroll.
Best,
Axel

Hey pals, what nice photos! I'm sure that your presence would have enhanced the proceedings no end! J x