For Baseball Fans Only

Please accept our apologies if this post has a limited appeal. But last night there was just one place to be if you're from St. Louis and a baseball fan -- and that was right in front of the TV watching the All Stars Game. 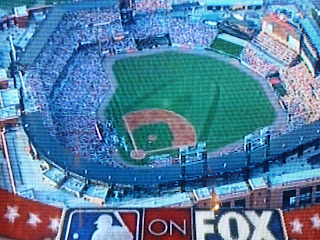 (Unless of course you were actually in Busch Stadium!!) 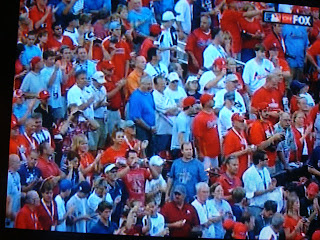 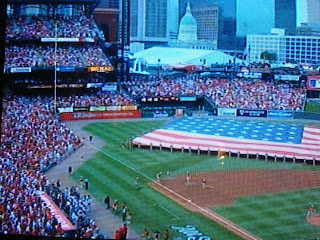 Cardinals greats -- Stan Musial, Ozzie Smith, Lou Brock, and others -- were featured in the pre-game show. 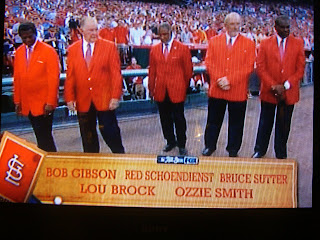 And the President, who threw out the first ball, was there to greet all the current players and those baseball greats. 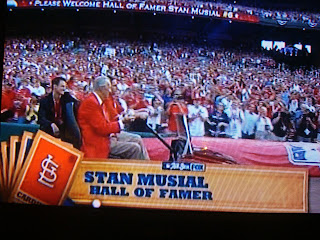 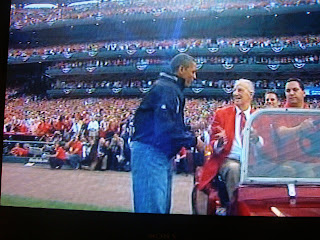 It didn't hurt our fun either that the President threw the first pitch to
our hero -- "The Great Albert," aka Cardinals first baseman Albert Pujols. 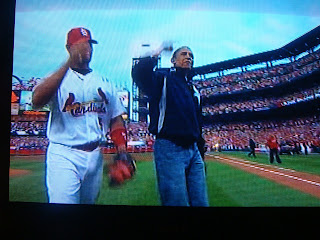 Later, when the President spent some time in the TV booth with Joe Buck, son of the long-time "voice of the Cardinals," Jack Buck, we captured five minutes of their conversation while the game was going on (it took forever to upload, so we had to toditch it for the moment). President Obama seemed to be having such a good time, and sounded so relaxed and real -- we enjoyed every minute! 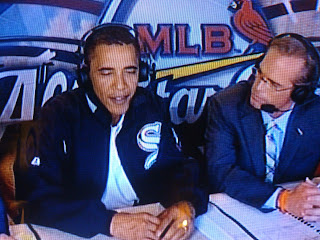 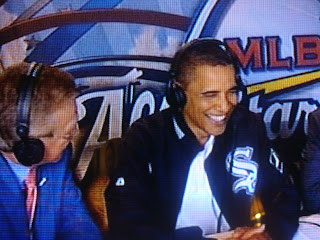 And we captured a shorter interview with Albert too. He, like most of the top hitters on the National League, didn't do much hitting last night -- but we love to watch him nevertheless. 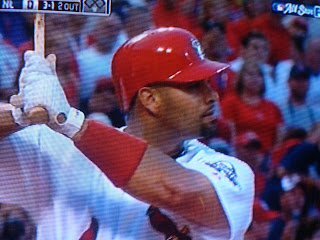 Not only is St. Louis our Dogdad's hometown, but, remember, we spent this past Christmas there with him and Mom -- so we too enjoyed every moment of the game -- except for the losing part...
Hope no dog minded this non-canine interlude.
Jake and Just Harry
Posted by Jake of Florida at 10:56 AM

Why is the stadium soooooo freaking 'big'

We khould have won save fur those homeruns that were just THIS much too short!

It was khool to watch!

Baseball, hot dogs, Cola Drinks and peanut shells. We only get to eat in the living room on very special occasions. Yummy! We had a good time. Teka fell asleep

We absolutely love your enthusiasm for your team! We think it's wonderful! Mom watched some America's Got Talent show last night! She flipped right past the baseball game! Dumb, huh?!

Sounds like a great time, and very exciting! But if the President was there enjoying the game, who was minding the country? Oh well, I guess even the President has to take time out to enjoy hotdogs and a ballgame. It's a great American tradition. :)

We watched it too!
We love baseball!
Kisses and hugs
Lorenza

Sounds like a lot of fun. The humans here were glad that the one representative of the KC Royals didn't embarrass and did so well pitching.

We enjoyed that game also.

We LOVED the game. Watched the whole thing, including all that pre-game and post-game stuff. Also watched the Home Run Derby on Monday night.

We are HUGE baseball fans here. Our favorite teams are the Yankees and the Phillies.

The city of St. Louis and the Cardinals were wonderful hosts. They put on a tremendous show. The game was fun. And, the right team won! Hehe...

pee ess My father is Yankee Doodle Bandit of Rexleigh, so my love of the Yankees comes naturally.

I confess, we watched the beginning, with the awards, and the President throwing the pitch, and then, well, I fell asleep. But I like the idea of hotdogs. I think that I missed the hotdogs while I was asleep. *sigh*

I must tell ya Jake 'n Just Harry that we are not baseball fans but we are BALL FANS.....same thing isn't it ??? Only difference is if anyone throws the ball.....we're gonna run ta get it.....we certainly would not let anyone hit it with a bat and surely not outta the ball park....why that is just wasteful......balls are built ta fit right inta yer mouth.....mine especially......

The All Star game was pretty fun, too bad Tanner's fave Justin Upton did terrible. My Yankees looked pretty good, it was pawesome when Rivera got Upton out, I was really getting on Tanner. St Louis did a great job putting on a great game.

It was fun to watch. We wish Albert played for our Reds. That would be awesome!!! Our boy lives most of the year in St. Louis with his mom (Webster Groves actually). It is a fun place to visit and we love the zoo and science center.