I don't know if we told you -- but the reason the folks are in New York is because my clients' dad had a business appointment today and their mom, when she heard about it said: "New York City? Without me? No way!!" So they decided to make it a business-pleasure trip -- only the pleasure doesn't really start until tomorrow at noon when he finishes his work.
This morning, their dad got up early and took a bus to Hackensack New Jersey to his company's office there, before coming back to the city this afternoon for an appointment. And their mom was left to her own devices.
That left me with a dilemma. Two people. One bird. Who to follow? Fortunately, they agreed that I should stick close to her. Which I did. But first, I flew over the city to enjoy the awesomeness of it all.

When my charge left the hotel, she found a fire station on the opposite corner and was struck by this poignant sight: A tribute to the firefighters in the Engine 54 Company who lost their lives on 9/11. 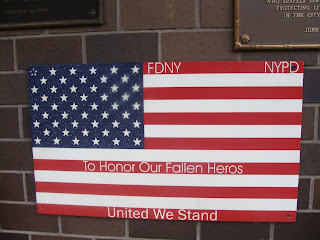 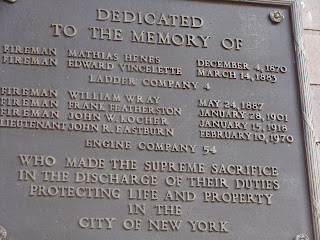 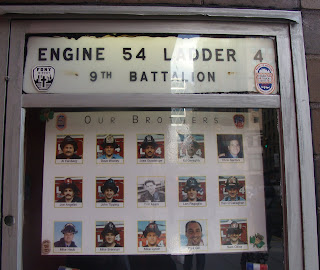 She stopped for a moment to pay her respects to those brave men, whose memories live on in the hearts of all New Yorkers -- as well as of people everywhere.
We don't know if you all saw the video a few weeks ago when a 747, a lookalike of Air Force One, the president’s plane, flanked by fighter jets, flew over lower Manhattan at 10:30 am. Thousands of New Yorkers panicked and fled from their buildings. As one commentator put it, it was because, for people here, 9/11 was just a few seconds ago.
New York is a city of many many moods. There's the Manhattan seen most frequently: Broadway, Times Square, the heart of the theater district, the yellow cabs... 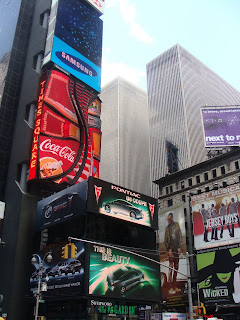 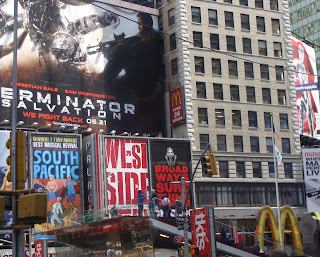 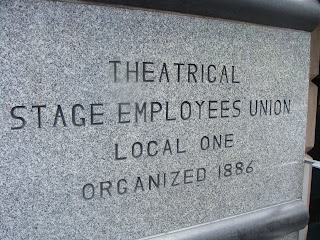 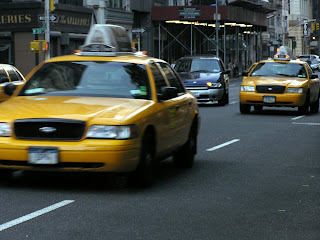 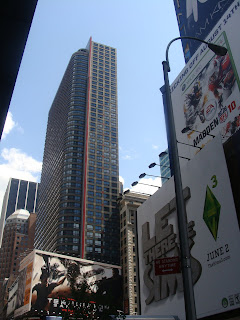 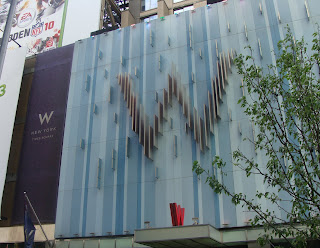 But then, turn the corner and see the traditional brownstone walk-up buildings -- some of which have turned blue... 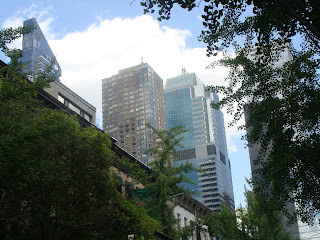 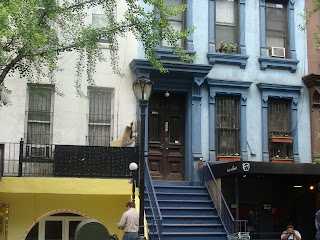 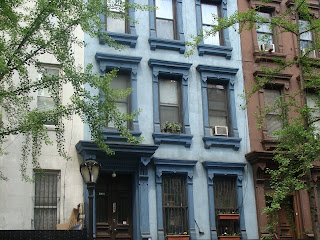 Dumpster diving has become an art in cities all across the country -- this one offered rare possibilities!! (I could hardly resist.) 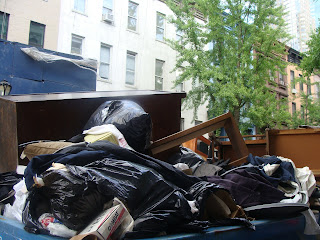 Then there's restaurant row. My lady had already eaten lunch (Vietnamese this time) so we just strolled leisurely down the street, not having to choose among the varied cuisines. 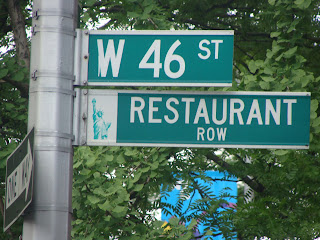 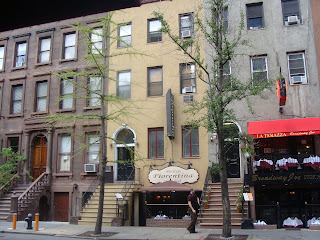 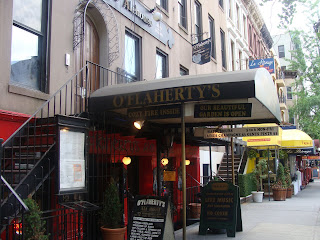 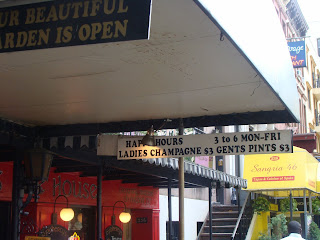 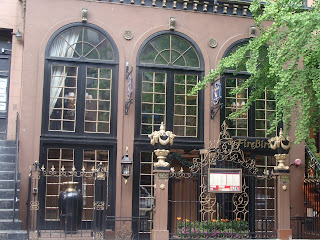 Heading back to the hotel, we found a landlord watering the pot he had just planted -- telling us that by July the plants would be spectacular. (Uh, he was so enthusiastic we decided not to say that, in our part of the world, they'd be spectacular by the end of the week...) 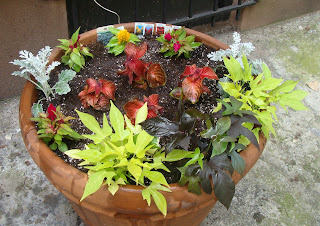 And some greenery dressing up a tree trunk -- fenced to keep out you know who??? 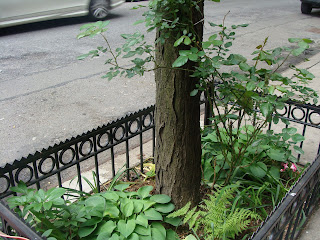 But what thrilled my avian heart was this reminder of who I'm working for -- a sign posted on a Broadway fence!!!

Ummm....I don't mean to lower the tone Mr Heron....but have you managed to drop a bomb on anyone yet? Hehe!

Ooooh, you saw a sign for BOYZ....did it say which way to turn? Or a zip code?? I could borrow TomTom, he'd know the way....*sigh*....it looks so exciting there.
Is it next Wednesday yet?
Mopey slobbers xx

For a Florieduh bird, woo are navigating the BIG APPLE Buildings furry well!

Our pawrents love NYC (to visit) - thanks for the "birds-eye" view.

Deaw HC biwd,
You awe doing the most pawsome wepowting job..The BOYZ awe going to be vewy pwoud of you.
Thank you fow saying all that cool stuff about NY.
I'm glad you stuck wif the lady and pwotected hew and didn't go to NJ.
I'm so excited that I get to meet you
smoochie kisses
ASTa
pee ess awe the boys having fun in camp?

What great sites you got to see, HC-bird! Manhattan is a very exciting place and because you can fly, you didn't have to deal with any traffic jams!