Well, it all happened so fast, we didn't have much time to react. One minute we were having breakfast and the next thing we knew, we were in the car and on our way to camp. We did suspect something might be up when we heard Mom putting kibble into plastic bags and saw her crawling under the sofa to unearth our favorite toys. And when Dogdad lured each of us onto his lap for a thorough comb-down. But, unlike many times before, there were no tell-tale suitcases. No piles of clothes on the bed. No long lists of things to take and do.
Fortunately, while we were in the car, I managed to paw Mom's cell phone from her purse and make a frantic call to our trusty Heron-Cam to see if he was available for following our humans around and discovering what they were up to. Business has been pretty slow, he said, so he flew at the chance. (For those of you who may not have met him before, Heron-Cam is a very clever and articulate bird who has a small video-camera tucked under his feathers, and who provides excellent reports of the curious things our folks do when they pack us off to camp.)
Why here is his featherness right now!!! 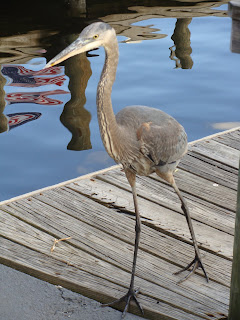 And so, we'll turn the rest of this post over to him.
Heron-Cam here: Well, guys, thanks so much for this opportunity to put a few clams in my beak!!! The reason you saw no suitcases and no clothes on the bed and no long lists of things to take and do is that your humans were only going away for the weekend -- and not very far at that. And, kind of deviously of them, they waited until you were gone to pack their one small bag.
Where did they go? Friday evening they drove north a bit to a town called Coral Springs to see the Capitol Steps -- a cast of five actors/actresses who mock everything that is happening in the bizarro world of human politics and celebrity. I heard your folks laugh and laugh and laugh -- especially when the lead actor recited what he called Lirty Dies. Gussie already knows about this -- and his muzzer and dad certainly must agree -- all it takes is to reverse letters between words for hysterical new meanings to come up. The favorite -- and I laughed too until my beak was quivering -- screeple poo up all the time!!
After the show, they drove further north to West Palm Beach, where they stayed at a Bed and Breakfast called the High Biscuits House, so they'd be closer to the main event of the weekend: Spring Training at the Roger Dean Stadium in Jupiter with the St. Louis Cardinals playing the Atlanta Braves! 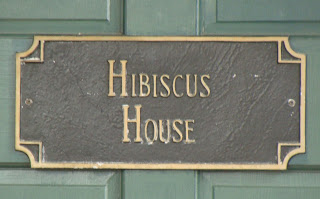 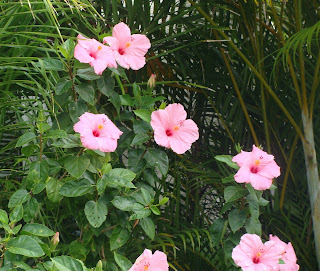 In the morning, they drove even further up north to Jupiter. They were early, so they wandered around for awhile before the stadium opened.
They enjoyed a "green market" near the stadium. 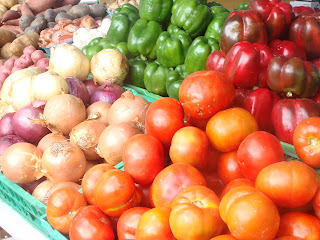 And they made friends with a beautiful lab named Naomi. Your Mom told Naomi's mom about the DWB and promised a "shout-out" to Naomi on the blog. "Hello, Naomi!!!" 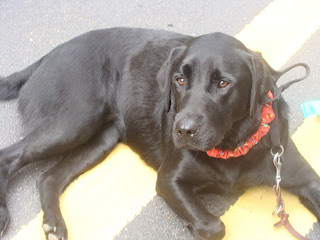 And then, and then, they passed a Sabrett stand. Your Mom looked at your Dogdad -- and you know what he did? He licked his chops, just the way you do!!! (So don't feel as though you are being manipulated, or anything!!) 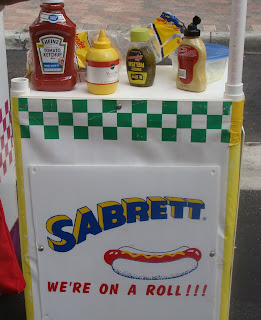 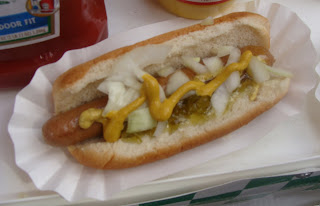 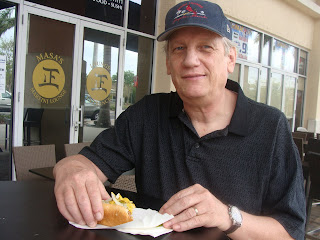 They walked around for a little while longer -- looking at the fountains in front of the stadium. 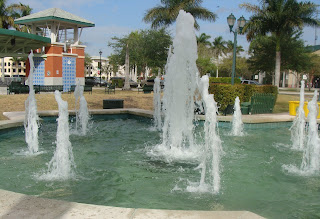 And the entrance to the team clubhouse. They went in and talked with a sweet lady who has been with Spring Training for twenty years and knows all the players. She shared a few lovely stories about the man who used to be the voice of the Cardinals, Joe Buck. 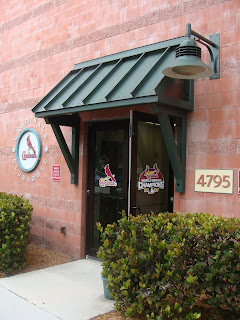 The outside walls of the stadium are adorned with murals of great players. We saw yesterday's Stan Musial!! 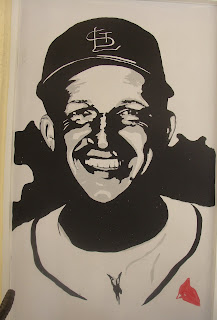 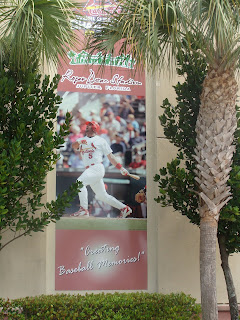 Then it was time to go in. Your folks were attending an alumni pawty sponsored by Washington University -- so they were on the pawty deck!! 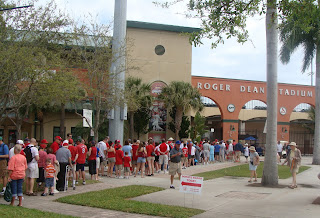 And got lots of inside information from team officials. 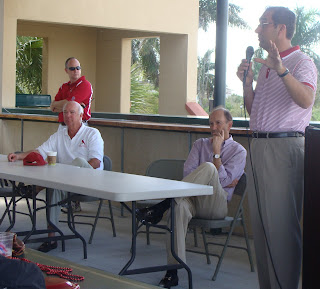 Finally it was time for that magical moment when your Mom's hero, The Albert, appeared on the field. 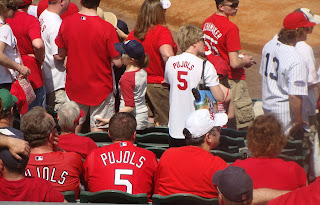 The fans seemed to share the same feeling of anticipation!! 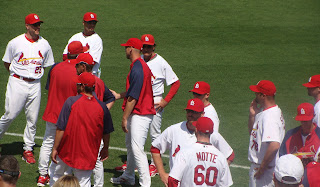 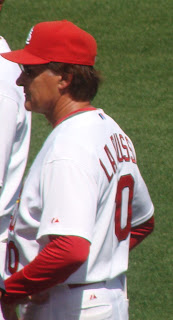 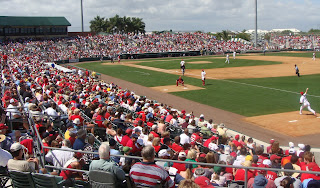 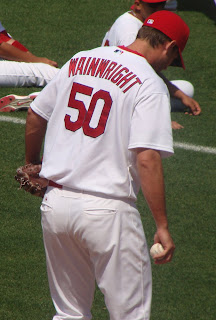 Now, this is where it may get a bit boring (if it hasn't already) for anyone who isn't into baseball -- or who may prefer another team -- but remembering how successful she was with her little camera (and forgetting that I was there with my professional heron-cam), your Mom focused on Senor Pujols and captured him in action, first playing at first base and second batting, while your Dogdad just enjoyed the game. 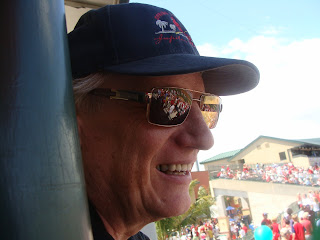 After the game -- which the Cardinals won!! -- your folks went back to the B&B and had cocktails with the proprietoress -- Tallulah -- whom your Mom quickly named Ms. Tallulah Barkhead. Since she looks a lot like your pal, Ms. Lorenza, except for her total nakedness, they recommended Lorenza's grandma to correct that situation. 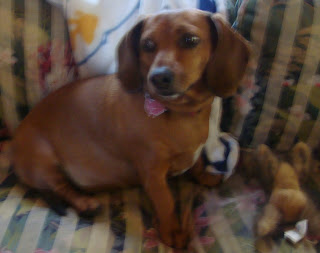 Then according to my notes, it was dinner at an Indian restaurant with your Mom's brother and sister-in-law, ice cream at a tiny Guatemalan shop, a final night at the B&B, and then home -- that's it, pals. (Oh, except that they did stop at a few stores before and after the game and may have purchased something for you to wear!!) 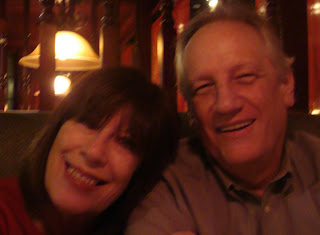 Jake, Just Harry, I hope this report is satisfactory, and that you will continue to employ my services (it's kind of dry out there for a water bird in between seasons).

Yours in good fur and feathership,
The Heron-Cam
Jake and Just Harry here: We're just back from camp and took a minute out of our busy day of heavy camp-recovery snoozing to read the Heron-Cam's report. We approve it all -- except for one puzzling thing. We are fox terriers. We spring all the time. No need for training. Our six-foot vet says that I, Jake, look him in the eye on occasion. As a matter of fact, over the weekend I sprung so well that I hurt a toe nail on the downdraft. So for us Spring Training is an anomaly. But we defer to our humans who, if the truth be told, are crazed. Happy St. Patrick's Day everyone!!! 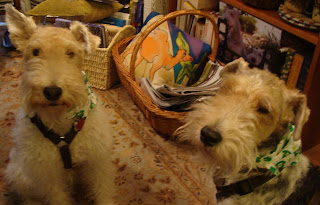 My mom went to Washington University too. She used to go to lots of Cards games at the old Busch Stadium. That looks like a fun alum event!

What a great job of reporting, Mr. Heron! With you on the job, the Barkalots never miss a thing! We're glad everyone is home safely and we're pretty sure your services will be required again, sometime in the future. Keep up the good work!

Barkies: We are so glad you sent the heron cam along. We enjoyed the video of Albert and are forwarding it to our dad and sissie. So, what did you get from spring training? A t-shirt?

My mom and grandma have been fans of Josh Beckett (the human) since the 2003 post-season as well. My grandma especially likes the story of how he couldn't get dinner reservations in Chicago after a certain pitching performance.

Great post guys with terrific pictures plus video!
We like the idea of heron cam - good thinking - a camera in disguise we like that.
Glad you had such a fun weekend.
love
Martha & Bailey xx

What a great job that Heron did. We need one of them. Looks like your humans had fun.

Ya know we've been readin' ur bloggie forever now and never could figure out that heron-cam thingie!!!!!

Now Boyz...of course I'll stop by for a sniffie with ya...and of course it's NOT A DATE!!!!! Of course, we could change that if ya want...you wanna come on the pic a nic with Joey and me? You know my motto...the more boyz the better!!!!!

That heron does a much better job with the news than any of those TV reporters. Maybe he could be one of those private eyes in the off season to earn more clams.

Your heron-cam is so efficient! It looks like your mom and dad had a really good time while you guys were at camp!
Happy St. Patrick's day!

The Heron-Kham was khwite helpful in keeping an eye on your peeps!

My mom liked the red uniforms but pretended they had "P's" on 'em!

It was khool they got to see some other khanines...I'm sure that helped them miss woo LOTS more!

Hi Jake and Just Harry! Do you go to a certain pet resort in Davie? My parents looked at it for me one time but they chose Hollydogs, which is closer and they got to pick me up sooner. So, about sweet little Lacie - whatever she wants is fine with me. (I wonder what will be in the picnic basket?)

My parents are ditching us for Spring Training games too! BUT we are lucky because those games are like 6 minutes from our house. I am glad your humans had fun and the heron cam could let us see what happened.

what interesting report and great pictures!

That was a pretty cool way of getting in the report, guys! It made us a bit homesick, imagining everything just with a "Chicago twist," right down to the hot dog and the Cubbies.