Heron-Cam Gets His Reward: A Live Fish

Now this may not look like much, but trust us -- it's a live fish that Mom and Dogdad picked out for steaming at a Chinese restaurant with friends on their last night in San Francisco. 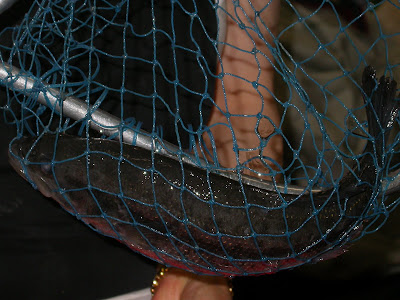 Reports are that they told the chef to save part of it for Mr. Heron-cam himself, as a thank you for all his good work. Additional reports are that the rest was steamed with ginger and scallions and was beyond delicious!!! Clams with black bean sauce were also on the menu.
We've decided that Mr. Heron-cam needs a name -- and the first one we thought of was Blue (see original San Francisco post); but we already have a friend named Blue, so we weren't sure what to do. But then we remembered that he really is a Blue Heron, so it's a no-brainer...especially for us terriers!!
Once he's made his way back from San Franciso, he'll deserve a rest, and we'll be back in real time!

(Pee ess: We've actually been home for four hours, and have not barked once!!! Could it be that our vocal cords have been exhausted? For how long, we wonder. What a terrible state of affairs!!)
Jake and Just Harry
Posted by Jake of Florida at 4:49 PM

What a huge fish! We're drooling just thinking about eating him!

LOL! I have no problem having such a fine bird share my name, especially as he did such sterling work keeping up the San Fran trip for you two.