To All the Dogs We've Sniffed (and More) Before -- and Aft!

Here starts a several-part narrative of our adventures between here and St. Loulis and back over the holidays. Since we are dogs, writing primarily for other dogs, we thought the best place to start would be with our canine encounters -- whether as related to us by our humans when we were not present or as experienced ourselves.


The first two encounters fall into the first category. We were not there. Why we were not there is another matter. But as we said before, we are dogs so sometimes we do not get to make the choices we want. On the other paw, as you will see below, sometimes we do get to make the choices we want (BOL) with interesting consequences.


So (get on with it, Mom): here are our St. Loulis pals, Gussie and Teka with their muzzer and dad. The humans had brunch together one very rainy morning. Since we live in South Florida, where it is mostly too hot to leave dogs in cars, Mom didn't realize they could have brought us and let us stay in the car, the way G and T did. As it was pouring rain, however, our post-brunch vicarious encounter with our two pals was very brief -- but we have to say, Gussie was looking spectacular and Teka quite the provocative imp. Muzzer and dad weren't too bad either! 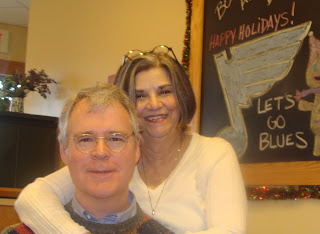 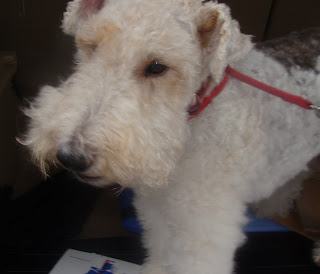 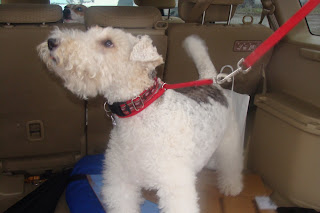 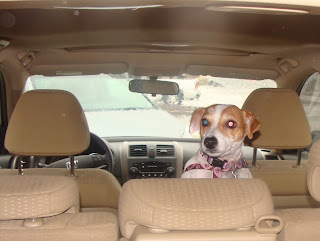 Next, and this surprise is for Khyra and the Op Pack and Tubey -- we actually have Sibe cousins - Alexandra and Chinook. Our silly humans thought it would be too much if we came along for a visit, so once again we had only a virtual encounter. Smiling below is Alexandra, with her brother curled up behind her. 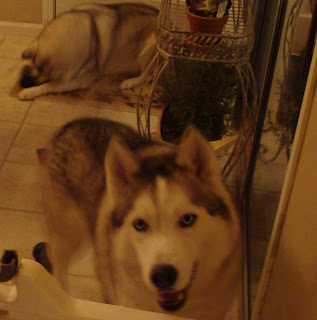 Alexandra and Mom hit it off -- Mom does do a mean scritch, having practiced on us. And Alexandra and Chinook enjoyed Dogdad as well. 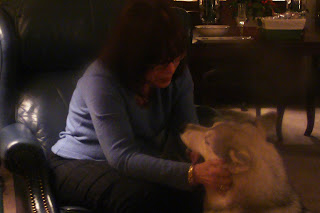 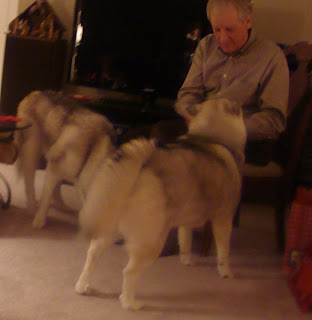 How 'bout them floofs??? 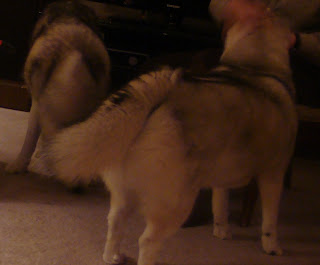 Ah, but finally, after we left St. Loulis for Paducah, we got to do again what we'd been looking forward to ever since last year: spend another evening with the waggle (and their very special humans)!!! Here are four of the waggle in their private waggle room: clockwise from the right: Mama Pajama, Lindy Loo, Swede William, and Sam I Am. 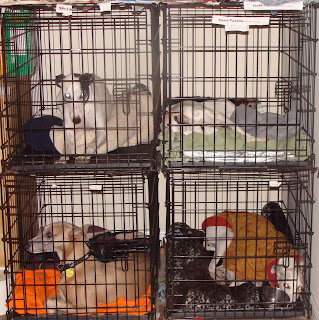 After a while, Swede William, known for his savoir faire and gentlemanliness, was allowed out to greet us. And here is where we once again embarrassed Mom and Dogdad so much that they almost denied knowing who we two "hairy dogs"* even were. Jake? Just Harry? Nope. Not ours. Never seen them before. 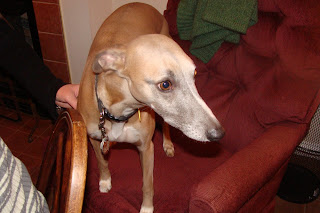 Let the videos speak for themselves.

Things quieted down a bit, or so the folks hoped, after we left Paducah and visited one of Dogdad's colleagues in Georgia. They live on a huge farm, and have several dogs as well as beautiful horses. Here's one with our new friend, Meredith. 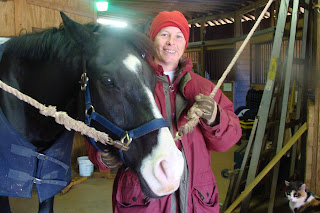 The tiniest dog was Daisy, a Jack Russel Terrier like Teka. 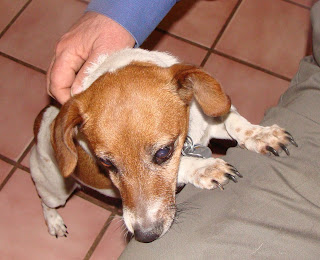 And the largest was Biddyock, an Irish wolfhound puppy --who was to celebrate her first birthday on the same day as I, Jake -- January 1st. 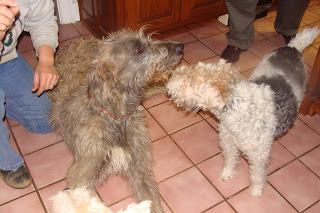 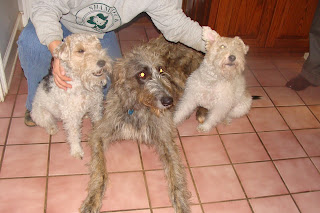 She and Meredith are almost the same height. 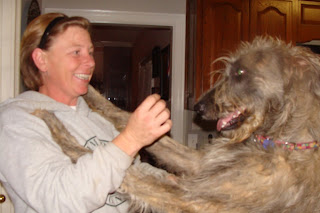 But then things weren't all that quiet as JH seems to enjoy trying to get it on with the ladies. Daisy wasn't interested in playing with him. And Biddyock was a bit too young to even know what was going on. But we decided you can't blame the lad for trying, right???

The last stop on our canine caravan was at our human brother's in Athens, where we played with our beagle-mix cousin Marcy. We don't have those photos as yet -- but we do have several statues of the University of Georgia's mascot "UGA." Like many cities, Athens has commissioned statues that artists can decorate as they like. 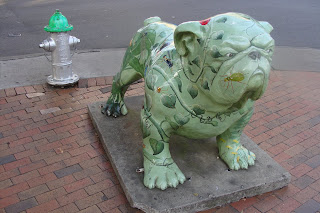 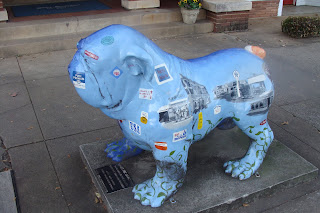 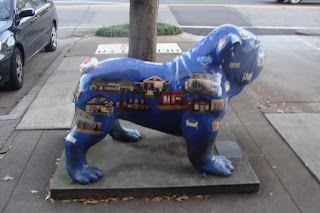 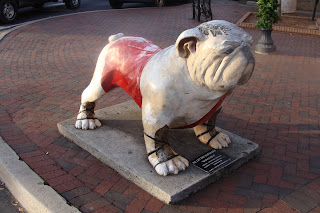 We don't think lover-boy JH would have been interested in trying his charm on these somewhat aggressive-looking characters -- but since we weren't there to find out, we can't say for sure.

Next time, we'll share a few different vignettes from our trip. In the meantime, if you look at a weather map of the US and see a tiny tiny yellow spot at the end of the Florida peninsula, contrasted with all the blues and purples everywhere else in the country -- that's us. It's in the low 40s, which is kind of chilly for here -- but we know it's better than anywhere else except Southern California right now.

Too bad woo didn't get to meet your Sibe khousins!

That would have been FUN!

They were furry beaWOOtiful and handsome floofs too!

Too bad woo didn't get to sniff Gussie or Teka!

It looks like you guys have been on a great adventure. the whippets sure are beautiful

WOWZA! That was a PURRty filled agenda! Lotsa' doggies and lotsa' visitin'☺

Wow...you guys are doing a great job. Muzzer may have to kill you for that photo, but Teka particularly enjoyed seeing Swede William movin' around the house.

she actually says "thank you."

Wow wow wow! You got to see Gus, Teka, the waggle, some sibes, some horsies, some terriers....holy cow. You guys are so stinkin lucky.

Hi, Jake and Just Harry!
Sure you had a great time meeting all those friends!
Going to Paducah to visit the Waggle was awezome right?
Thanks for sharing all those pictures and videos! I will be waiting for more!
Kisses and hugs
Lorenza

First of all, do not offer sanctuary to Scruffy...I'm pawsonally sendin' him to Siberia...serves him right all that slander or libel or whatever...

Did I hear someone say on that video that HARRY oops hairy dogs don't have CLASS???? JH...were ya humpin' those whippets? I mean...SW's tail was tucked like there was not gonna be a tomorrow...frankly, I thought you dogs were very polite to them...compared to what we woulda done...

And you got to see Gussie and Teka was PROVACATIVE???? Oh my...we are totally jelly!! Those sibes did have magnificent floof...I'm thinkin' of growin' my tail out...my butt's so tiny though it might be outta proportion...????

Kisses boyz...and we ADORED your cardie ya sent!!!!!

Harry...do ya think that stoopid pic of that foxy/lakie cross looks a tiny bit like you?????????

You guys are having wonderful adventures!
We never knew Swede William was a lap dog!

My, those whippets were kind of snooty, huh? Even so, sounds like a fantastic adventure. So many cool doggies and of course humans for yours to commune with. Looking forward to part II.

Crickey you two certainly do get around! I'm still chuckling at the videos of you two with the whippets and Mom is muttering thank dog that wasn't me!! Your Dad still blushing?!!

Shame you only had a virtual visit with Gussie and Teka but expoect Muzzer sang you one of her special caroles?

Wow, you had quite the adventure of meeting lots of pups. How great that you have sibe cousins! Alexandra and Chinook are beautiful, and yes, definitely super floofy tails:) Thanks so much for showing us them. You know, sibes do best with other sibes too, at least that is the case with us. We loved watching you two following Swede William around - did he have a really special smell to him?:-)

We are really sorry you didn't get to meet Gussie and Teka - we think that would have been quite the highlight of your trip. Maybe next time.

Okay. Swede William here. I have no problem with Hairy Dogs. I am from Sweden, which is next to Norway, which has the Nobel Peace Prize, so no duh.
However.
I am known in these parts as THE Swenglebert Humperdink. Meaning *I* am the HUMPER, not the humpee, as in not some Hairy Dog Sex Toy.
I. Was. Mortified.
What if my Teka saw??? And where were the rest of my pack buddies during my humiliation? Normally, hey, they are out and about, begging under the table with noses on guests' laps.
But no, the servant locked them in jail the whole time, fearing a Violent Event. They could see the Hairy Dogs humping me and all they did was bark. Great.
The worst part was that I swear I saw Lindy Loo (upon whose head I generously donate my best humping techniques)... smirk. Yup. She smirked on my humiliation.

The servant was all "Oh it was so good to see you! Jake and Just Harry were so good! Do come back!" and the rest of the whippets were so enamored of the treats and toys that they invited y'all to come AND HUMP ME any ol' time.

My life is hard.

Teka, don't believe everything or anything you see on the net.

Sincerely-
Swede William. And. All whippets are lap dogs.